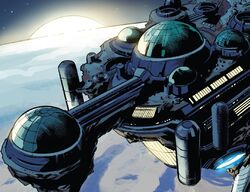 Asteroid M was the orbital space station of mutant terrorist Magneto. Asteroid M has been destroyed and reconstructed many times. All of them had several levels, including an observation deck, hangar bays, medical facilities, technology that kept it concealed from standard detection technology, and were all positioned in stationary orbit.

Magneto completed construction on Asteroid M just before recruiting his children, Quicksilver and Scarlet Witch, into his group of Brotherhood of Evil Mutants.[1] It was destroyed in a battle with the X-Men, when Scarlet Witch sabotaged a button, designed to kill the X-Men.[2] Crashing off the coast of San Francisco, this Asteroid M was later brought to the surface by the X-Club, under the orders of Cyclops, and became the new mutant homeland: Utopia.[3]

The second Asteroid M was a cubic mile in size. It was reconstructed just after Magneto imprisoned the X-Men in his Antarctic citadel, reducing them to the level of six-month-old babies.[4] The space station was severely damaged, when Warlock, an alien being from a techno-organic civilization with rigid rules and regulations, was fleeing to Earth and collided with it, breaking it to pieces.[5] After learning that pieces of his spacestation had fallen to Earth, Magneto, who had joined the X-Men, left them to travel to Kampuchea, on his own, and retrieve the technology in it. Magneto was intercepted by the Avengers and the X-Men arrived to aide him, before the Super-Soldiers and Crimson Dynamo arrived. The three teams fought over Magneto and, in the confusion, the X-Men slipped away with him. Magneto left the X-Men, again, to get the tech on the spacestation and, after finding it, began wearing his old helmet again. After the Avengers showed again, the X-Men, again, came to Magneto's aide and they left with his tech, while destroying the rest of the Asteroid.[6]

It was during his brief association with the Hellfire Club, that Magneto rebuilt a fancier version of Asteroid M. Magneto wanted a contingency plan, if things didn't work out with the Hellfire Club. Therefore, he proceeded to rebuild his base of operations, to survey the Earth, from high above. The asteroid was in synchronous orbit and 250 kilometers above the Earth (synchronous orbit was actually much farther from Earth than this; in all likelihood it was being magnetically levitated at that altitude). The asteroid also had selective inhibitor fields, that may have kept mutants or super humans from using their powers. This version of the asteroid had medical & science facilities, an observation deck, sleeping quarters, and a swimming pool.[7]

From there, Magneto heard of Scarlet Witch's troubles and went down to Earth, to bring her back to his space station.[8] When the West Coast Avengers attacked Asteroid M, Magneto had service robots on the station that were instrumental in alerting Magneto to the presence of Wasp on his base. For obvious reasons, Magneto's entire asteroid wasn't made out of metallic objects, which Quicksilver demonstrated when he ripped out plastic tubing from one of the consoles.[9]

After events involving Zaladane, in the Savage Land, Magneto returned to Asteroid M, to live in peace. Magneto's peace didn't last that long, when the Acolytes, led originally by Fabian Cortez, requested and were granted sanctuary by Magneto from American soldiers that were chasing them. Asteroid M was destroyed again, after Cortez set off nuclear missiles that were around the asteroid, from an escape pod.[7] Although Magneto survived the re-entry of Asteroid M to Earth, the rest of the original Acolytes did not. The remains of the Asteroid M crashed into the Middle East. Later, Forge, Henry Peter Gyrich, and other government officials, inspected the wreckage.[10]

Magneto, later, built a much bigger space station, Avalon, from pieces of Asteroid M, Shi'ar technology stolen, while Magneto was a member of X-Men, and Graymalkin, the space station that belonged to the time-traveler, Cable. This space station was destroyed between a battle with reality hopper Holocaust and Exodus.[11]

Xorn (who thought he was Magneto) trapped Wolverine and Jean Grey-Summers on a new version of Asteroid M and moved the remains of the asteroid complex into the sun.[12]

For a brief time, Magneto tried to help protect mutantkind with more compassionate methods, namely by mentoring the time-displaced X-Men.[13] Following a global crisis caused by the release of the power-bestowing virus Mothervine, Magneto was pushed to his emotional brink,[14] and vowed to once again advance his mutant agenda by any means necessary.[15] After abandoning the young X-Men, Magneto set up a new Asteroid M, where he established a new incernation of the Brotherhood of Mutants.[16]

Asteroid M was a series of reality warps, where Apocalypse attempted to use the X-Men and their powers.

Asteroid M acted as a safe haven, protecting who was left of the Acolytes and the Black Panther from the hordes of zombies on Earth.

On Earth-94831, Asteroid M was Magneto's home base, and he used it to hurl another asteroid at the Earth in an effort to destroy all life there. It was mostly destroyed when Hyperion arrived to kill the remaining mutants who lived there.

Magneto pitted mutants against each other to see who was fittest to join him on Asteroid M (These included Cyclops, Havok, Jean Grey, Storm, Rogue, Blob, Avalanche, Quicksilver, Sabretooth, and Professor X). He used the Gems of Cyttorak in a machine to "evolve" mutants, and he claimed to have used it on himself. When Sabretooth went through the process, he became more beast-like in appearance. When Cyclops & Havok underwent the process, both were able to control their enhanced powers (Cyclops no longer needed his ruby quartz glasses) and gained white hair.

In the X-Men Legends game, it was in the final mission and served as the place where the player battled Magneto. It was also the home of his Gravitron superweapon. In this version, Asteroid M was not above Anya's grave but above New York City.

Like this? Let us know!
Retrieved from "https://marvel.fandom.com/wiki/Asteroid_M?oldid=6486000"
Community content is available under CC-BY-SA unless otherwise noted.