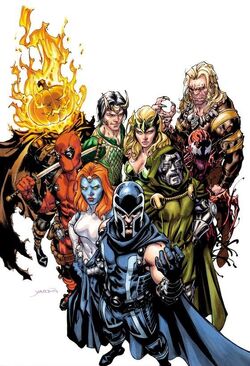 In the wake of the World War Hate, the Red Onslaught released his Stark Sentinels, robots designed specifically as counter measures against super heroes, due to their date being based on Tony Stark's files during the Civil War.[3]

Magneto recruited numerous super villains to join forces against the common threat the Red Skull represented,[4] and managed to turn the tide of the battle for enough time so the Scarlet Witch and Doctor Doom could cast a spell to invert the Red Onslaught's personality and defeat him.[5] However, the spell affected all of those present in the battle, including Magneto's group. Thus, the heroes became evil, and the villains of Magneto's group became good.[6] After the Red Onslaught was defeated, the villains from the group went separate ways.[5]

After it was noticeable something was wrong with some of the Avengers and the X-Men, Steve Rogers reassembled the inverted villains so they could form the resistance against the inverted heroes.[7]

Even though the Astonishing Avengers failed to stop the inverted X-Men,[8] the appearance of the Axis gave them a second wind to keep on fighting[9] long enough for Doctor Doom, the White Skull (the inverted version of the Red Skull), and the Scarlet Witch (possessed by Daniel Drumm in order to cooperate) to cast a reinversion spell, which turned almost everyone back to normal.

Before the battle, the Astonishing Avengers had decided to record a video sent to the media, in which they blamed the evil actions of the Avengers and the X-Men on themselves, claiming to have manipulated the X-Men and Avengers using the Enchantress' magic, as the "Axis of Evil."[2]

Like this? Let us know!
Retrieved from "https://marvel.fandom.com/wiki/Astonishing_Avengers_(Earth-616)?oldid=6081058"
Community content is available under CC-BY-SA unless otherwise noted.