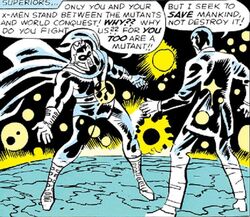 The Astral Plane is an alternate dimension in an equivalent space to our own, where all matter is composed of ectoplasm. On the astral plane, the life energies and consciousnesses of other beings are discernible to adepts. Adepts can reach the astral plane by psionic or magical means. Powerful psychics and sorcerers astral project their "Spirit or astral body" into the realm allowing them to manipulate the astral plane e.g. turning their arms into weapons or growing in height.[4]

Returning from her trip into the universe and learning of the Elder Gods' degeneration and slaughter, Oshtur created the Astral Plane, one of the four first Inner Planes, as a place for her to exile herself in order to preserve Atum's banishment spell, which would leave Gaea vulnerable.[5]

It borders the domain of Nightmare.[6]

The astral planes are "other dimensions within and beyond the material plane" [sic.]. Human dreamers visit the harmless lower astral planes, but trained wizards are able to visit the higher astral planes, inhabited by dangerous creatures such as the barbarian beast Balzaroth. The witch Morgan le Fay managed to ensnare sleeping college student Clea Lake and trap her in the higher astral planes, from which she could not escape by herself, as a bait for her enemies Sorcerer Supreme Thomas Lindmer and Doctor Stephen Strange. Lindmer, weakened by a previous duel with le Fay, feared that such a quest could destroy him, so he instead trained Strange to perform the rite, and taught him a plea to Raggadorr that repelled the dimension dwellers. Strange's ring with the symbol of light was useful for the spell that sent Strange to the astral plane. Strange had a psychic bond with Lake that he followed to find her. Le Fay was unable to stop them and she was thus chastened by her sponsor the Nameless One.[8]

Like this? Let us know!
Retrieved from "https://marvel.fandom.com/wiki/Astral_Plane?oldid=6514001"
Community content is available under CC-BY-SA unless otherwise noted.