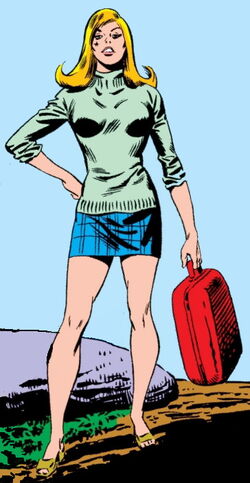 Astella Carpenter is an inhabitant of the original Counter-Earth. The Man-Beast possessed the body of Astrella's brother Rex Carpenter who later went on to become President of the United States.[1]

Astrella fell in love with Adam Warlock but often set traps for him to help her brother. She eventually told Adam Warlock the truth. Later the Hulk and Warlock defeated the Man-Beast and departed Counter-Earth.[2]

Like this? Let us know!
Retrieved from "https://marvel.fandom.com/wiki/Astrella_Carpenter_(Counter-Earth)_(Earth-616)?oldid=5723270"
Community content is available under CC-BY-SA unless otherwise noted.