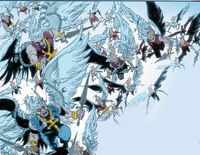 Base of Operations
Heaven; The House of Blue Lights, Manhattan, New York
Affiliations

The Asura are a core of angelic assassins which have existed in the Judeo-Christian segments of faith, and who are dedicated to eliminate demons, human heretics and uphold their fates in the End of Days.[citation needed]

When God asked that all first born children of Egypt to be killed, the Asura were dispatched,[5] and were recounted in Exodus: 1-13 as the "Angel of Death".[6] The Void was also presented as having performed the deed.[7]

In recent years, it was suspected that the Annunaki Dagon impersonated Yahweh, as El, and was the leader of violent faction of angels, such as the Asura.[8]

To latter effects of the 1990's, the Asura would create the homunculus Stephen Loss as their divine operator to enact as an exorcist and warrior for the Asura against Earth's demons and sinners and claim dominion of the world for the Asura at the beginning of 1900. Dr. Loss would become allied with Ingenuity Lee to form The House of Blue Lights within New York City to devise several occult and mystical items not exempt with the drug Sacrament K, a mind-controlling drug that is made from essence of angels, which would be used to collect and control derelicts of New York on the Asura's behalf. This drug would be used onto the Devil-Hunter Gabriel Rosetti to kill select Satanic cults such as the Ambassat by killing its patrons and burning down their temple. The Asura would personally arrive to set their assassinations against Satanic priest Anton Devine until interventions for his protection would be made by Daimon Hellstrom and religious terrorist Jaine Cutter as the two would battle variant demons and demon-gods in the process.[citation needed]

In Bend Sinister, Utah, the possible Asura Tzadqiel would possess one of three Satanists to the Church of Lucifer to gain their souls in an abandoned cabin which would gain intervention by Daimon Hellstrom as to incite a spell to trap the four essences in the house indefinitely until the angel killed the three and committed suicide in a result of madness.[citation needed]

Gabriel the Devil Hunter would soon target Daimon Hellstrom after infiltrating Jaine Cutter's apartment to steal her Breathing Gun - a mystical gun able to kill demons- then infiltrate Daimon's home at Fire Lake, Massachusetts to injure Daimon's shoulder then damage his trident. Hellstorm would set to retaliate this intrusion by bringing Gabriel Rosetti into his home, which contained spells to prohibit the essences and presence of angels to enter his property as to instill the removal of Sacrament K from Rosetti's body inducing the witch-hunter into a near fatal cripple from drug withdrawal. Infuriated with the threats upon his life, Hellstorm infiltrated the House of Lights to encounter Stephen Loss once more to kill the Devil-Breaker, burn his home with the mystical artifacts within, and disable the prospects of the Asura for the time being.[citation needed]

When the Black Host of Zadkiel attacked Heaven, the Asura confronted him and asked him to stand down in exchange for an exile into the Ninth Circle of Hell. He refused, and the Asura submerged him for an instant, though he slaughtered them all and went out of the fight mostly unscathed.[5]

The Asura perceive themselves as soldiers, while Zadkiel saw only cutthroats and assassins among them.[5]

The Asura on the Marvel Appendix

Retrieved from "https://marvel.fandom.com/wiki/Asura_(Angels)_(Earth-616)?oldid=5544379"
Community content is available under CC-BY-SA unless otherwise noted.