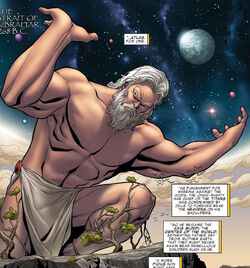 Atlas is a member of the Titans a group of humanoid beings that hale from the pocket dimension; Olympus. He was condemned to hold up the sky for eternity by Zeus. He is also the Axis Mundi which moves around the Earth to wherever the spiritual and culture dominates at the time.[1]

He was born on Olympus, he was the son of Iapetus and Clymene, and brother of Prometheus, Epimetheus and Menoetius.[4]

He sired the Pleiades (Maia, Alcyone, Electra, Celaeno, Sterope, Merope, Taygete) with his wife Pleione, but also the Hesperides (Aegle, Erytheia, Arethusa) with Hesperis and the Hyades (Coronis, Cleeia, Eudora, Phaea) with Aethra.[1]

When Zeus rebelled against his father Chronus, Atlas and his army fought back against the young Olympians. The war became known as the Titanomachy, and lasted for almost 10 years. Zeus released the Titans' enemies from Tartarus, overwhelming Atlas and his forces.[1]

When the Olympians defeated the Titans; Zeus the most powerful sent out two Eagles to mark the boundaries of his dominion. Where they met was declared the center of the world. It was there he condemned Atlas to hold the Heavens aloft as the Axis Mundi, the world Axis. The continent where he stood was christened "Atlantis" which simply meant the "Isle of Axis".[5]

In 18,000 BC, a group of sorcerers in Atlantis tried to harness the power of Omphalos the "naval of the axis" to control the turning of the Axis to make themselves the center of the world forever. This caused Atlas tremendous pain. The powerful energies wielded through the Omphalos caused the Great Cataclysm sinking Atlantis beneath the ocean.[5]

Gaea, goddess of Earth, gave Hera a tree of Golden Apples as a wedding present. Atlas' daughters had the role of protecting it.[6]

The Axis Mundi shifted to the region that world that would one day be known as Morocco in Africa. A millennia later he encountered Perseus who was traveling through the region after slaying Gorgon; Medusa. The Hesperides offered him shelter on his long journey home. Perseus tried to take some Golden Apples as a gift for his mother. When Atlas saw him and tried to warn he used Medusa's head to turn him to stone. He was turned into the Atlas Mountains.[1]

In 1268 BC, Hercules was ordered to fetch the golden apples from Atlas' daughters, so he asked Atlas for help. Atlas had Hercules hold up the heavens while Atlas went to look for his daughters, who had the apples. Finally Atlas returned, but he didn't want to take over holding up the sky again. He had enjoyed his brief break and told Hercules that he would deliver the apples himself to the king. Hercules tricked Atlas into taking the load back by asking Atlas to hold it while he shifted the load. Hercules then took the apples and Atlas again shouldered the weight of the heavens.[6]

In 528 BC, he stood over the Falgu River in India, as Siddartha Gautama attained enlightenment to become the great Buddha.[1]

In the first century BC, he passed over what would become Korea.[1]

On September 18th, 1793, the President of the United States of America, George Washington, was at a ceremony laying the corner stone of the capital of the new city Washington, D.C.. When he was laying the stone he looked into the sky and noticed something he had never noticed before, Atlas holding up the heavens thus revealing that the Axis Mundi was now in North America.[2]

The Washington Monument became the modern worlds link to the Axis Mundi.[7]

The Queen of the Amazons; Artume hoped to use the Omphalos to manipulate the Axis Mundi bringing the world under the control of the Amazons. After inciting a ritualistic dialect to relieve Atlas the burden of holding up the heavens and she set him upon Hercules as a distraction. Namora assisted in the fight and as the heroes battled the vengeful titan he grabbed the Washington Monument and used it as a club. Hercules entered the Smithsonian Institution and began throwing aircraft at the vengeful Titan. However Hercules was able to knock Atlas out, causing him to come crashing to the ground. During the hustle and bustle of reality shifts between the various hands who possessed the universe altering item in question, Artume snuck in a cheap shot against its last handler before completing the chanting rite which enabled her to take the reigns of reality into her hands.[2] This short lived world where Amazonia reigned supreme was returned to normal and Atlas was returned to his punishment.[8]

Hercules later returned to Washington, D.C. with Zeus. They traveled to the Washington Monument to find the Norse Axis Mundi link to Yggdrasill.[7]

Though rarely engaging in combat in recent millennia, Atlas was the Titans' greatest warrior. He is easily outwitted, but has extensive knowledge of world geography and human history.[1]

Like this? Let us know!
Retrieved from "https://marvel.fandom.com/wiki/Atlas_(Titan)_(Earth-616)?oldid=5567593"
Community content is available under CC-BY-SA unless otherwise noted.