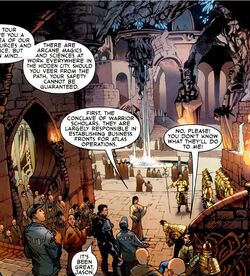 The Eternal Empire (now the "Atlas Foundation") is one of the most inscrutable, pervasive and enduring secret societies on Earth. It traditionally pursued world domination but currently uses its covert power and influence for humanity's greater good.[1]

It has existed since the time of the Mongol Empire. The Eternal Empire was established in the at the twilight of the Yuan dynasty in the 14th century, when it was going to be overthrown by the Red Turban Rebellion and replaced by the Ming dynasty. It went underground per the directions given to them by the dragon who had been advising the Mongol Empire, Mr. Lao.[3]

The organization has its own legions of warriors known as the "Golden Horde" and its elite warriors are those of the "Horde Guard".[4] Serving as its commanders or managers are the "Warrior Scholars". Those who are "sensitive" (psychically) meditate near Mr. Lao when he sleeps so that they can pick up images and memories from his past. It's the warrior scholars who are mostly responsible for the establishment of the Atlas Foundation's business fronts.[5][2]

Steeped in advanced science and ancient sorcery, the society regards itself as a perpetuation of the ancient Mongol Empire, with each leader a descendant of and rightful successor to Genghis Khan. As he grows old, each Khan seeks a successor and upon the successor taking leadership, the previous Khan is devoured by Mr. Lao.[1]

For most of the 19th century, the Atlas Foundation society was led by Master Plan.[10]

Plan had long since selected his potential successor, Jimmy Woo, despite the attempts of Jimmy's parents to spare him this legacy and their flight to America. Jimmy Woo became one of the top West Coast FBI agents, but Plan Chu made himself into Woo's greatest enemy, the Yellow Claw, so as to help Jimmy advance his career and hone his skills. Indeed, nearly all of Jimmy's adventurers and allies were in some way all part of the Atlas Foundation's machinations.[1]

One such adventure was prompted by the Yellow Claw's kidnapping of President Eisenhower in 1958. Authorized to assemble a special rescue team, Woo reviewed his files on active super-beings and instinctively selected a roster that came to him in a dream: Gorilla Man, Venus, Marvel Boy, and aquatic heroine Namora. Namora declined to join the mission but found a replacement by helping Woo salvage the lost Human Robot. Meshing smoothly as a team, Woo's "Department Zero" rescued Eisenhower and accomplished various other missions, repeatedly clashing with Atlas Foundation agents and pawns such as the mutated canine cosmonaut Laika; however, U.S. authorities ultimately decided the world was not ready for such bizarre heroes and disbanded the group, declaring their missions classified.[11]

In recent years, now an agent of S.H.I.E.L.D., Jimmy longed for the action in his youth. He renewed his investigations of the Atlas Foundation alongside a team of rogue S.H.I.E.L.D. agents, but his team was killed and Woo himself nearly slain while invading the Temple of Atlas. Woo was eventually rescued and revived by his former allies of the G-Men, who agreed to help Woo uncover the truth of the Foundation. Joined by S.H.I.E.L.D.'s Derek Khanata, the heroes subsequently exposed and shut down many subversive Atlas operations operating under various legitimate business fronts, finally invading the Temple of Atlas itself. The heroes confronted Master Plan and his royal adviser, Mr. Lao, who revealed Woo's true heritage and the Atlas Foundation's plans for him. Seeing a chance to use the Atlas Foundation's immense resources for good, Woo accepted his new post as Khan of the Eternal Empire and CEO of the Atlas Foundation with the blessing of Plan, whom Lao promptly consumed. Allowing the world to believe them slain by the Claw, Jimmy Woo's heroic team remained together as the core Agents of Atlas, the foundation's primary covert super-operatives. Derek Khanata has concealed their continued existence from his S.H.I.E.L.D. superiors.[10]

The Atlas Foundation hindered the Skrulls' activities on the West Coast during their Invasion. Afterwards, however, the world had changed, and Woo and his team took a surprising step: to use Plan Chu's villainous reputation to present themselves as the Agents of the Atlas Empire. Their first act was to steal all the gold in Fort Knox, which Norman Osborn had earmarked for special weapons programs. Then presenting themselves as valuable allies, offering to build Osborn weapons in a floating factory in the Hudson River. However, they also let the underworld know that Atlas was active, waiting for a hero or the authorities to come shut the factory down.[12]

The Agents of Atlas successfully formed an alliance between Namor McKenzie and the Atlanteans when Namora and the Sub-Mariner expressed their love and decided to marry. Despite Namor's pleadings, Namora decided to join the Agents of Atlas to further their goals. After Jimmy Woo learned of the location of his old love Suwan, now the Jade Claw, leader of the Great Wall. His visit ended up breaking an ancient treaty between the Atlas Foundation and the Great Wall that was unbeknownst to Woo. Despite his love for Suwan, the Jade Claw's relentless assault on the Atlas Foundation's operations left him and the Agents no choice but to end her rule. After Suwan's defeat, Woo left Temugin in charge of the Great Wall as a new Asian branch of the Atlas Foundation.[13]

Like this? Let us know!
Retrieved from "https://marvel.fandom.com/wiki/Atlas_Foundation_(Earth-616)?oldid=6441697"
Community content is available under CC-BY-SA unless otherwise noted.