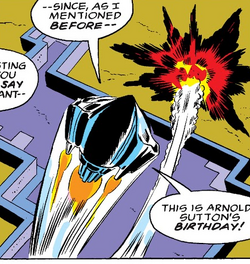 The Avengers and Nighthawk rushed to Atomic City to stop members of the Squadron Supreme from launching the satellite Brain-Child One into space, because it may well destroy the entire Earth. After that Scarlet Witch halted the launch, deciding that the satellite creator Brain-Child was a threat, the combined forces of the Avengers and the Squadron Supreme left to stop the boy before he could attempt to destroy the Earth again.[1]

Like this? Let us know!
Retrieved from "https://marvel.fandom.com/wiki/Atomic_City?oldid=6435311"
Community content is available under CC-BY-SA unless otherwise noted.