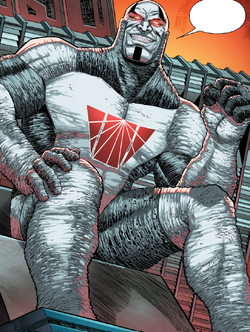 Let whoever's left come! Send them all! It won't be enough! I am power incarnate! I am the only savior humanity needs! I... am... Regent!

Empire Unlimited CEO Augustus Roman felt abhorrence towards super-humans ever since his family died during a conflict between the Avengers and the Masters of Evil.

Believing that super-humans and their powers should be contained and controlled,[1] Roman created a prison known as The Cellar, located on Ryker's Island. On the surface, The Cellar appeared to be nothing more than a holding facility, when in reality its super-powered inmates were restrained inhumanly, and had their powers replicated into a special suit designed for Roman.[2]

After absorbing the powers of enough supervillains, Roman decided to set his sights on bigger targets, capturing and absorbing the powers of The Avengers, as well as heroes such as Hyperion, Iceman, and Quicksilver. This led him into battle with Iron Man and Spider-Man (Peter Parker), quickly ending with the heroes' defeat. Mary Jane then donned the Iron Spider armor to rescue the two heroes, providing a distraction that enable the heroes to escape.

While Regent battled the heroes, he, Parker and Mary Jane experienced the sensation that they had already fought each other. Parker and the other Spider-Man, Miles Morales, subsequently freed Regent's prisoners and were able to defeat him. Upon his defeat, Regent was incarcerated at the Cellar where different heroes took turns watching over him.[3]

The Regent regained his freedom at some point afterwards, appearing as part of the Army of Evil during their attack on Manhattan in retaliation for having been imprisoned at Pleasant Hill,[4] which could entail that Regent himself was at some point transferred from the Cellar to Pleasant Hill and took part in its mass breakout.

Like this? Let us know!
Retrieved from "https://marvel.fandom.com/wiki/Augustus_Roman_(Earth-616)?oldid=5707565"
Community content is available under CC-BY-SA unless otherwise noted.