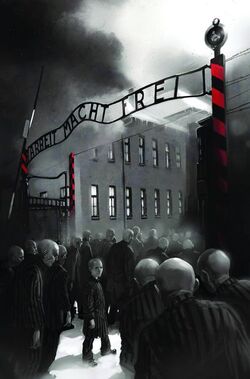 Auschwitz is indeed one of the darkest parts of our own historical reality (World War II, Earth-1218), it's also a part of the history in several Marvel Universes.

As the Nazis took over control in Poland in 1939, they built one of their many Konzentrationslager (Concentration camps) to gather their prisoners -especially Jewish people, Roma and Sinti, members of religious groups or homosexual people. The Vernichtungslager (Extermanintion camp) Auschwitz II-Birkenau was created by Heinrich Himmler to annihilate the Jewish race in Europe. Between 1942 and 1944 trains with captives from all over Europe, found their final destination at Auschwitz where the motto "Arbeit macht frei" ("Work sets you free") stood above the gates. One of their prisoners was Max Eisenhardt, who should become the mutant leader Magneto some time later[citation needed]

He was captured in 1942 after his family fled from Warsaw Ghetto and were captivated and executed by Nazi soldiers on their way to their hideout. Max survived the execution unseenly and became a prisoner of the Nazis some time later.[citation needed] He arrived Auschwitz in September 1942. With the help of Fritz Kalb, his former teacher, who also was a member of the Kanada Kommando that sorted the belongings of the new arrivals, he became accidentally a member of the Sonderkommando. This squad were forced to do the dirty work for their Nazi masters e.g. to pull the corpses out from the gas chambers, to take their valuables and to burn the corpses in ovens. After two years Max discovered a Gypsy girl that he knew from his years in Germany, Magda. He fended for her to stay alive. Once he managed to get Magda out of the Auschwitz camp to the KZ Buchenwald, when he heard that the Nazis wanted to liquidate the Gypsy family camp. In that way Max saved her from the Zigeunernacht (Gypsy Night) in August, 2 1944. When the Sonderkommando squads planned to uprise against the Nazi camp guards in October 7, 1944, Max got the information that Magda had returned in the old Gypsy camp. Once more he tried to get her out of the camp by hiding her in a corpse pile which came to the Sonderkommando for burning. After he found her, Max hid Magda in the bungalow of his squad that was not pleased to hide the girl. As someone wanted to inform the Kapo that they had found her, Max pulled a knife to threaten him. The leader of his squad was encouraged by his behavior and started the hesitated Sonderkommando revolt by detonating hidden pyrotechnical material at Crematorium IV. Max and Magda escaped from the Death camp in the commotion of this uprising. Hundreds of prisoners fled from the extermination camp as Max and Magda did, but a lot of refugees were captured again and then executed.[citation needed]

In January, 27 1945 Soviet troops liberated Auschwitz, but before they could arrive the camp, the Nazis destroyed parts of the camps to hide their crimes some weeks earlier. They also started to evacuate the camp, so they forced the remaining prisoners on a death march to another camp. Some of them were liberated by the Soviets in January, 27.[citation needed]

An estimated 1.1 million people were murdered at Auschwitz.

Like this? Let us know!
Retrieved from "https://marvel.fandom.com/wiki/Auschwitz-Birkenau?oldid=5529962"
Community content is available under CC-BY-SA unless otherwise noted.