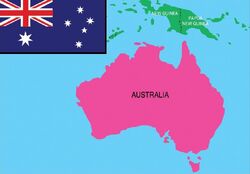 Australia, officially the Commonwealth of Australia,[1] is a country comprising the mainland of the Australian Continent, the island of Tasmania, and numerous smaller islands.

Australia's capital city is Canberra,[1] while its most populous city is Sydney. Although independent they still retain Queen Elizabeth as their head of state.

Over one hundred millennia ago, Orphan, a sentient extra-terrestrial device capable of telepathic communication and transforming dreams into reality, crash-landed on Earth in the Australian outback.[2]

The continent was settled by Aborigines from Southeast Asia 40,000 years ago before the first Europeans explorers came.[1]

Approximately 10,000 years ago, Julunggul the Rainbow Serpent shed her skin. Altjira collected this skin, stretched it over the frame of night, and sealed it with the kiss of sleep to create a great vessel capable of sailing through the Dreamtime to any realm inhabited by gods, regardless of their shape or form.[7][verification needed]

Oprhan was eventually located by an Aboriginal tribe, who venerated it and regarded it as their own link to the Dreamtime, reinforcing their belief in the Aboriginal Gods.[2]

The first Europeans began exploring the area in the 17th century.[1]

In 1770, Captain James Cook claimed it as part of the British Empire.[1]

In the late 18th and 19th centuries, the British created six colonies.[1]

In 1901, the colonies were federated into a new country, the Commonwealth of Australia. The new new country took advantage to its natural resources to quickly develop both agricultural and manufacturing industries.[1]

During World War I, Australia was a major contributor to the British effort.[1]

During World War II, Australia remained a major contributor to the British effort.[1]

Australia was in constant conflict with Imperial Japan. During a conflict between the Japanese and Australian Navy in 1942, the Sub-Mariner led an Atlantean assault to assist the Australians in driving back the Japanese invaders.[8] Also during this time a Japanese scientist set up a lab on an island off the coast of Australia. From there he used an evolutionary ray to hyper-evolve lizards into and army of Shaggy Men to invade the country. This plot was thwarted by the Patriot.[9]

In 1944 the Japanese dug a tunnel from Singapore to Australia to invade the country in-land. This operation was discovered by the Sub-Mariner, who flooded the tunnel before the invasion could be complete.[10] Nazi scientist Doctor Necrosis managed to infiltrate the Red Cross in Brisbane where he tainted blood supplies with the deadly White Gangrene virus until he was exposed by Captain America and Bucky.[11]

Reavers were based out of Cooterman's Creek is a high-tech facility disguised as an abandoned town in the Australian Outback.[12]

When Microchip tapped into the Reavers computer system, the Australia-based mercenary group. He stole plans to build a combat robot dubbed the "Dalek". The group found the hack and decided to seek revenge the trashed the Punisher's safe house and then went after Microchip and Castle.[13] Microchip creates the Punisher's Exo-Armor to level the playing the field for Castle against the Reavers.[14]

Much later, Rogue returned to the area for some solitude after the events of the Messiah Complex in which she had absorbed the consciousness of Mystique.[15]

The Black Widow met up with Iron Man near the Great Barrier Reef, north of Cairns, and told him about her S.H.I.E.L.D. assignment.

In one of Sydney's finest hotels, Tony Stark was kidnapped while the Black Widow was distracted by a battle with Iron Hand Hauptmann.[16]

The Sydney Opera House was taken by a Jemaah Islamiyah terrorist cell, who was eventually defeated by Iron Man and the S.H.I.E.L.D. Alpha Team.[17]

Some time later, Cyclops and Wolverine rescued a mutant known as Ugly John from a residual Sentinel attack.[18]

When Black Bolt confronted Thanos in hopes of preventing the Mad Titan's invasion of Earth in the search of his son, he unleashed a powerful attack that triggered a Terrigen Bomb and destroyed Attilan in the process.[19] The resultant Terrigen Cloud released in New York City began to circumvent the globe, striking Sydney and transforming Humans of Inhuman descent including Panacea.[20]

Bishop chased Cable to Australia in the future timeline of 2276, after multiple nuclear strikes hit the country.[21]

Like this? Let us know!
Retrieved from "https://marvel.fandom.com/wiki/Australia?oldid=6416702"
Community content is available under CC-BY-SA unless otherwise noted.