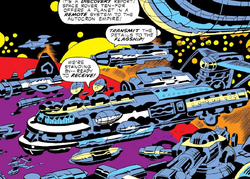 The Autocron Fleet is the interstellar combat force of the Autocron Empire, which is responsible for the conquest of worlds, turning organic worlds into slave colonies. Autocron fleets are led by Admirals.[1] It consists of a variety of starships, including cruisers and guardships.[2]

An Autocron fleet in another galaxy received a transmission from an Autocron Rover, the Holocaust Specialist Ten-For who was on Earth. Being a seasoned Rover, the admiral gave the order for the fleet to head to his destination.[1] It soon appeared at the rim of Earth's Solar System and headed toward Earth. The Machine Man, having defeated Ten-For, turned him into a thermonuclear bomb via changes to his circuitry. He created a space-time portal and sent Ten-For through, setting a trap for the incoming fleet, which encountered the booby trap by Jupiter and was destroyed by the explosion.[2]

Retrieved from "https://marvel.fandom.com/wiki/Autocron_Fleet_(Earth-616)?oldid=5544397"
Community content is available under CC-BY-SA unless otherwise noted.