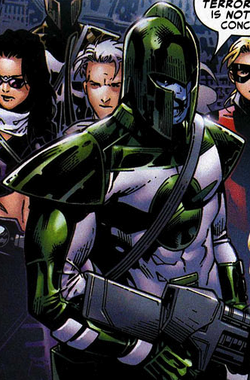 Av-Rom was a Captain in the Imperial Kree Army and headed the squad sent to Earth to retrieve Hulkling and inform him of his heritage. A fight broke out between the Kree, Skrulls, Super Skrull, Young Avengers and New Avengers but was eventually stopped. Av-Rom was part of a mediation to decide what would be done with Hulking. He agreed to, and believed, that the young Kree/Skrull hybrid would spend half a year with the Skrull Empire and half a year with the Kree Empire. Av-Rom remained unaware that the person he believed to be Hulking at that time was in fact the Super Skrull impersonating him so Hulking could remain on Earth.[1]

Following the war against the Cotati, a number of Kree and Skrull worlds have mysteriously ceased communication. Av-Rom joined a group made up with Tarna, Keeyah, M'lanz and Virtue, led by Talos and were sent to investigate. To their horror, they found that all of inhabitants have been consumed by Symbiotes which then attacked them. As Symbiote Dragon engulfed their ship, Av-Rom along with most of the group got overwhelmed by the monsters, leaving Talos and Tarna the only survivors. He was discovered by them trapped by the symbiote mass and begged Talos to kill him before Knull began taunting Talos through Av-Rom. As Talos made his way to the escape pods, Av-Rom, and the infected members sat side by side with Knull, taunting Talos further before he escaped.[2]

Like this? Let us know!
Retrieved from "https://marvel.fandom.com/wiki/Av-Rom_(Earth-616)?oldid=6339330"
Community content is available under CC-BY-SA unless otherwise noted.