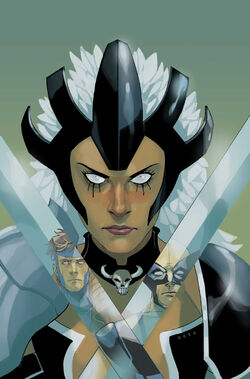 My name is Ava'Dara Naganandini. Soldier of the Shi'ar Imperium. Royal Warbird. Deathbringer class. I know the way of the Shi'ar. I know how to kill. how to die if need be. I just wish... I wish I knew how to live.

Ava'Dara Naganandini is an elite Shi'ar warrior of the Warbirds assigned to protect the ruling family. Warbird was born 22 years ago in a breed art warehouse in Chandilar's flesh bazaar district. Her "father" was an automated seed sprinkler and her "mother" was one of the thousands of frozen eggs harvested each month from female factory workers as part of their government-mandated body-tax. Warbird's birth mother was an alien slave brought from a conquered world whose body wasn't meant to birth a Shi'ar and so she died after giving birth to Ava'Dara. Ava'Dara worked in a war factory and learned how to assemble a pulse cannon before she learned how to talk. Ava'Dara loved to draw as a child but she would burn her drawings as she considered what she liked wasn't the way of the Shi'ar. She trained and gained the Warbird title in an academy[4]. At unknown point in her life she conducted "mating rituals" with someone while trapped inside another being and surrounded by flesh-eating monster aliens.[5] After showing mercy to a child in a mission, the Shi'ar wanted her to hate children so her punishment was that she was sent by Emperor Gladiator, to escort Kid Gladiator as his personal bodyguard. Kid Gladiator was sent to Earth as a punishment for destroying more than half of the Shi'ar royal city on Chandilar, so she was brought with him to "protect" his son from danger.[6][4]

Warbird arrived with Kid Gladiator to Earth on the first day for school. During an attack on the Jean Grey School of Higher Learning by Krakoa, Warbird fought Krakoa and the Frankenstein monsters. When Iceman formed a group of ice-clones to fight Frankenstein monsters Warbird shows some romantic interest in one of the ice-clones.[7]

When Exodus attacked the Jean Grey School and the students were sent to the safe room for their safety, Warbird went with Kid Gladiator and refused to let Rogue take part of his power to fight Exodus and when Rogue teleported and took part of his power through a kiss on the cheek Warbird became enraged and said she would kill her, but Kubark told her she was pardoned by royal decree.[8]

Warbird tried to stop Kid Gladiator from entering Kitty's body but failed.[9]. When she entered Kitty's body along with the other X-men they found Kid Gladiator only to lose him again and when they find him again, they discover that he wasn't himself as the Brood turned him into one of them.[10]

Warbird and Iceman were left to hold Kid Gladiator while Beast tried to destroy the egg sac inside the infected Kitty. After Kid Gladiator used his heat vision on Iceman's head, Iceman responded with restoring his face and beating Kid Gladiator up to which Warbird asked him to stop doing it. Later on, Warbird confessed to Bobby that she considers him to be, without a doubt, the most vigorous male she has encountered since arriving to Earth and asked him if he ever conducted "mating rituals" with someone while trapped inside another being and surrounded by flesh-eating monster aliens, because she did once to which Bobby answered with a low voice that it was a good time for Kid Gladiator to melt off his ears. After the egg sac is destroyed and Kid Gladiator is subdued the team leaves Kitty's body through her mouth. While Kitty was taken by S.W.O.R.D. to be cured of the remained Brood inside her she kissed Bobby while Warbird was watching and she did not seem too happy about it.[5]

Warbird entered Gambit's apartment with a decapitated head in her hand saying: it has begun, and when the Marauders broke into the apartment she helped the team fight them.[11] When Iceman was hurt by Chimera she was shown to be worried about him. She chooses to fight Vanisher from the Marauders and told him she will find a way to cut his head off. When Iceman covered the area she thought it was magnificent and when Bobby noted she is looking at in a weird way she told him she wanted to conduct "mating rituals" with him right now.[12]

Return to the Shi'ar

Ava'Dara is a Royal Warbird of Deathbringer Class[2] with the following abilities:

Warbird possesses the normal strength of a Shi'ar woman who engages in intensive regular exercise, She can lift (press) over 1 ton.

Warbird has shown sexual interest (more or less expressed and scored) for Doop,[15] Quicksilver[16] and Iceman.[2][17]

Like this? Let us know!
Retrieved from "https://marvel.fandom.com/wiki/Ava%27Dara_Naganandini_(Earth-616)?oldid=5379930"
Community content is available under CC-BY-SA unless otherwise noted.