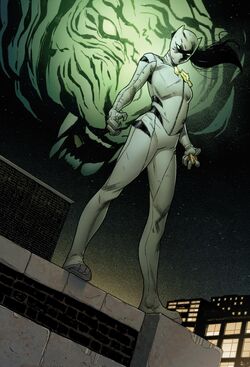 I'm the beast that hunts in the darkness now. I'm the monster who even monsters fear. I'm the White Tiger.

The powers of Ava Ayala, alias White Tiger, came from the White Tiger Amulet, inherited from her niece Angela del Toro. Her family was murdered by Gideon Mace.[2]

She joined the expanded Avengers Academy roster at the California-based Avengers Compound, as the first new full-time student since the Academy's inception.[3][4] Her initial interest in why Reptil wasn't a more active Hispanic role model led to early tension between the two,[4] with Reptil not seeing why he needed to be more than he was.[5]

With the other students she battled the Purifiers[6] and Hybrid (Jimmy Marks)[2] who was banished from the school.[7] She also attended many training sessions at the school.[8]

Ava joined the Heroes for Hire, along with Luke Cage and Victor Alvarez, the new Power Man. They all started believing they were meant for something more and decided to create their own Avengers team.[9] Based off a hashtag, they named themselves the Mighty Avengers.

Since joining the Mighty Avengers, Ava and Victor bonded tremendously, together they discovered two new abilities to fuse her White Tiger God based powers and his chi manipulation. The first being him able to move chi from people within their area into Ava creating a White Tiger made out of chi.[10] The tiger was so powerful that it was able to destroy a splinter of Shuma-Gorath.[11]

Feeling grateful that Victor enabled her to control that kind of power, she later repaid him by transferring some of her power to him. Being that Ava had a lot more chi than the average person, it gave Victor tremendous amounts of power, enough to take out a Cerberus or demonic three-headed dog. He and Ava called their combo the "New York Tiger-Style Kung Fu."[12]

Victor helped White Tiger when she tried to kill Gideon Mace for the death of her parents and was being possessed by the Tiger God that gave her powers.[13] With the intervention of the Mighty Avengers, White Tiger was prevented from crossing the line and killing Mace.[14]

For her own safety, Ava was kept restrained in Kadesh, the laboratory and home of her teammate Blue Marvel. Disappointed by Ava's failure in killing Mace, the White Tiger god confronted her and threatened to kill her. However, Ava convinced the god that if he killed his last avatar, the Mighty Avengers would surely destroy the Amulets, endangering the White Tiger himself. Thus, Ava left the tiger divinity with the choice to submit to her or perish. The White Tiger chose the first option, giving her full control of his powers.[15]

After the Mighty Avengers disbanded,[16] White Tiger and Power Man joined Sunspot's New Avengers, though they stopped dating and remained only friends.[17]

Following an adventure in Rome, Ava was targeted by Angela del Toro, who deludedly thought that Ava had stolen the Amulets of Power from her. Angela had also been equipped with a version of the Amulets of Power from an alternate universe, acquiring the powers of a White Tiger god from another reality. During the ensuing fight, this reality's White Tiger realized that with the presence of another set of amulets and another potential avatar, he no longer needed to submit to Ava's will, and abandoned her.[15]

In spite of losing her powers, Ava kept pushing herself and continued carrying the mantle of the White Tiger.[18] A new chance for Ava to prove herself against Angela presented itself when Sunspot's Avenger Base Two was attacked by the Maker's New Revengers, a team which included del Toro in its ranks.[19] Following an arduous fight against her niece, Ava managed to snatch the Amulet of Power from her neck and break it, freeing Angela from both the Hand's and the White Tiger's possession, bringing her back to her senses in the process.[20]

Both White Tigers fought against the New Revengers back-to-back,[21] and continued working in tandem when Sunspot targeted rogue A.I.M. splinter cells to shut down. With the mission accomplished, Ava decided to retire from being the White Tiger and convinced Angela to do the same.[22]

Ava had seemingly become the White Tiger once more (though still without the amulet) after Luke Cage sent out a distress call to Misty Knight to "bring everyone" while he and the Defenders were in a street brawl with Diamondback and his henchmen (Fixer, Titania, and Moonstone). Among those who answered the call along Ava were Elektra, Spider-Woman, Echo, Colleen Wing, and Misty herself.[23] Whether or not Ava has embraced the mantle of White Tiger once again remains unclear.

Like this? Let us know!
Retrieved from "https://marvel.fandom.com/wiki/Ava_Ayala_(Earth-616)?oldid=6181644"
Community content is available under CC-BY-SA unless otherwise noted.