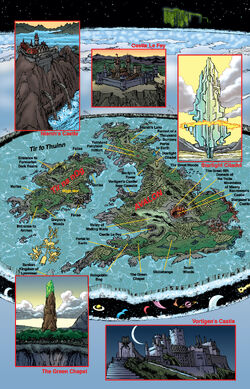 Avalon is a Kingdom in Otherworld and one of the provinces of the Fair Courts under the Starlight Citadel.[2] A realm of ancient magic beyond the confines of time and space,[3][4] it is directly accessible from Earth at several points[5] and as many other Kingdoms were either closed or extremely hostile to visitors;[6][7][8][9] most visitors from Earth never saw or knew of anything in Otherworld beyond Avalon itself. It has been described as a place of ancient towers and tranquil medieval splendor;[10] however, non-native visitors report that is appearance changes over time.[11]

Avalon was created by Gaea as her own dimension realm and one of the first four Inner Planes.[1] Avalon was in many ways a reflection of the Earth during the golden age of the goddess when the forests were tended by her druids, the skies were aflutter with her faeries and the earth was green and full of magic.[12] A land of tranquil beauty and fairy forests, Avalon has long stood as a haven for honor, magic and the pursuit of knightly virtue.[4] Avalon is spiritually and subconsciously tied to the land itself in Earth’s own Britain. When Britain thrives, Avalon thrives, and when Avalon is in peril, Britain itself can feel the heat of the flames.[4]

Long under the personal protection of the wizard Merlyn, the seat of power at Camelot has been largely held by the great king Arthur Pendragon and his knights. From the fairy isle of Tír na nÓg to the noble Green Chapel, Avalon is lush and ripe with history and culture. Magic is in the very fabric of Avalon, and the realm is home to many powerful magi and practitioners, and as such, its people have long lived in peace, safety and comfort.[4]

Following the destruction of the Multiverse as a consequence of the incursions and its subsequent rebirth, Otherworld has changed and expanded. For millenia, Avalon was the only realm known to exist in Otherworld; however, it has recently been revealed that Avalon is but one of five Fair Courts of Otherworld, as opposed to five other Foul Courts.[2] In the frey, King Arthur disappeared in Camelot and, in his absence, Morgan Le Fay became Queen Regent of Avalon.[13]

Shortly afterwards, Morgan le Fay declared war on the Omniversal Majestrix Opal Luna Saturnyne, the rightful ruler of Otherworld and all of its kingdoms. Following the first volley of Le Fay's attack, the Starlight Citadel was cloaked from view for safety during wartime.[14] Amidst the chaos, a gateway to Otherworld emerged on the newly-established mutant nation-island of Krakoa. Morgan le Fay planned to destroy the gate to prevent mutantkind's dominance over her realm; however, in the following days, a new Excalibur led by a new Captain Britain, the mutant Betsy Braddock, stormed Otherworld and dethroned Morgan le Fay. In the aftermath, Jamie Braddock was crowned king of Avalon.[15] Under his rule, the Kingdom of Avalon was open to visitors.[16]

Avalon is a small, otherdimensional planetary body, a relatively flat, asteroid-like landmass suspended in space.[5] Its geography is shaped, in part, by the collective subconscious of the British Isles.[17] The Kingdom of Avalon mostly consists of two main islands,[5] each of them one of the Inner Planes:

Other points of interest include the Sunken Kingdom of Lyonesse, of which only a few scattered islands remain,[5] and Tír fo Thuinn, a realm under the seas.[20] Tír na nÓg houses entrances to the Fomorian’s Dark Realm and the Celtic underworld Annwn, while Avalon’s Great Rift leads down into the Netherworld.[5]

Avalon is spiritually and subconsciously tied to the British Isles[4] and is intimately connected to its symbolic sites in the Earth realm.[17] In places of power, permanent portals provide access between Earth and Otherworld's Avalon Kingdom,[5] including the ring of standing stones in the Cheviot Hills’ Darkmoor,[21] Stonehenge,[17] the Tower of London, Avebury, the Buckingham Palace, Hadrian's Wall, Cragside in Northumberland, Clifton Suspension Bridge in Bristol, Cavern Club in Liverpool, Karl Marx grave at Highgate Cemetery, Alan Moore's Greenhouse in Northampton[22] the Long Man of Wilmington, Glastonbury Tor,[23] St. James Park[24], as well as various hidden sidhe (fairy mounds) situated throughout the British Isles.[25]

Routes created by the Twelve Walkers, men of power who perceived the magical Ley lines connecting the two dimensions also lead to Otherworld.[5][26] A small island nearby the village of Stanleigh, England, conceals the Gates of Otherworld, which can only be opened using Captain Britain’s Star Sceptre.[27] The Captain Britain Corpsmen are able to flow freely between Otherworld and their native reality at will.[28][13] The native faeries also have the ability to cross over back and forth between the two realms.[29][30] Recently, a gateway has been established between the mutant island-nation of Krakoa and Avalon, though it is only functional when empowered by ancient mutant bones.[31][32]

Like this? Let us know!
Retrieved from "https://marvel.fandom.com/wiki/Avalon_(Otherworld)?oldid=6080722"
Community content is available under CC-BY-SA unless otherwise noted.