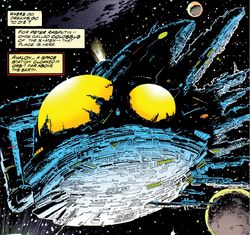 Cable stationed Graymalkin in Earth's orbit, as a headquarters. Cable's Celestial A.I., Professor, had assumed control of Graymalkin. The station had complete control over every part of its structure and could fashion rooms, weapons, and vehicles as needed from various storehouses and parts it had. It was able to design and run training programs for Cable, as well as make living quarters and workshop areas for him. Graymalkin not only served as a base for Cable, but also allowed Cable to teleport through time and space, with the time displacement core (TDC). Cable simply had to command Professor to "Body-Slide" him to a destination.[2]

Graymalkin faked its destruction when Nick Fury, agents of S.H.I.E.L.D., and War Machine tried to investigate it for whereabouts on Cable, dumping parts in the ocean and in X-Force's Camp Verde base, but the remaining parts, including its core, used cloaking to hide itself.[3]

Magneto also stationed Asteroid M in Earth's orbit, as a headquarters. Asteroid M had been destroyed and reconstructed many times, so it's uncertain which model, if not pieces of them all, Magneto used to build Avalon. All of them had several levels, including an observation deck, hangar bays, medical facilities, and technology that kept it concealed from standard detection technology.[4][5]

Magneto discovered Graymalkin, deactivated the Professor, and used the Shi'ar technology stolen from his time with the X-Men to expand it with pieces from his older space station, Asteroid M, naming it Avalon. From Avalon, Magneto sent out his new servant, Exodus, to bring mutants to it. Exodus first went to ex members of Magneto's original group, the Brotherhood of Evil Mutants, but did not find them worthy. Next, Magneto chose his former students, now members of X-Force, who had been students of Magneto when they were part of the New Mutants. X-force leader, Cable, followed and managed to disable Avalon's teleportation system and copied the Professor from the core of the station into his own techno-organic body parts. Cable and his team escaped, but former New Mutants Rusty Collins and Skids remained on Avalon with Magneto, due to the fact that he reversed the brainwashing that Stryfe had implanted.[1]

Shortly afterward, Magneto sent Exodus to bring his followers, the Acolytes, a cult devoted to and his views on human-mutant relations, to Avalon as well and after expelling Fabian Cortez, collected the group. Magneto declared that Avalon would be a safe heaven for all mutants, away from humanity and all mutants that declined his offer were considered enemies. He took Avalon into Earth's atmosphere and during its approach, its shadow sent several million into abnormal darkness. It could be seen as far as New York City and caused havoc to the planet's electromagnetic field for weeks, starting with tidal waves and weather anomalies. While the X-Men mourned at the funeral of Illyana Rasputin, Magneto surprised the collective X-groups of X-Men, X-Factor, Excalibur, and X-Force with his return and the sight of Avalon. After a brief battle, Colossus accepted membership in the Acolytes.[6]

After Professor Charles Xavier sent Magneto and Avalon away, the world governments implemented the "Magneto Protocols", a satellite network built by Forge in slightly lower orbit than Avalon, which skewed the Earth's magnetic field enough to prevent Magneto from using his powers within and from returning to the planet's surface. The attempt to limit him was met with a worldwide electromagnetic pulse-wave that not only destroyed the satellites, but deactivated every electric device on Earth within minutes. In retaliation, Professor Xavier sent a group of X-Men to Avalon and battled Magneto. After almost killing Wolverine, Professor Xavier absorbed Magneto's mind into his own, leaving Magneto a vegetable. Exodus took over the leadership of the Acolytes and Avalon.[7]

Later, the trial for Neophyte was held, to determine if he was a traitor to the Acolytes or not. Colossus was his defense, Amelia Voght his prosecution, and Exodus the judge. After a heated case, Exodus found him innocent, but banished him from Avalon.[8]

Avalon was destroyed by a battle between reality jumper Holocaust and Exodus, after Holocaust arrived in mainstream reality and assumed that Magneto was the same Magneto that led the X-Men in his reality.[9]

Exodus tried to gather the pieces of Avalon to rebuild it shortly afterward, but halted his plans when Joseph turned up, thinking that Joseph was Magneto.[10]

Pieces of Avalon and Graymalkin were later gathered by Cable to built the island of Providence.[11]

Like this? Let us know!
Retrieved from "https://marvel.fandom.com/wiki/Avalon_(Space_Station)?oldid=5465918"
Community content is available under CC-BY-SA unless otherwise noted.