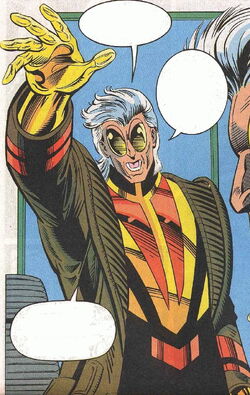 Avatarr was a member of an unknown alien species with multi-dimensional vision[4] and hallucinogens for blood. At some point in the 21st Century, he took control of the major American corporation, Alchemax,[3] becoming its C.E.O. and establishing a new Board of Directors composed of Vice-Presidents of Alchemax's several divisions and departments.[1][5]

Since he wanted to completely hide his very existence from the public's eye, Avatarr had Alchemax Director-General[6] Anderthorp Henton publicly acting as the corporation's C.E.O.[7]

To find an ultimate resolution to both Alchemax's rival company Stark-Fujikawa and the recently appeared Nueva York hero Spider-Man,[2] Avatarr had Research & Development Vice-President Tyler Stone employing Stark-Fujikawa's warrior known as the Specialist in order to kidnap a girl named Kasey Nash, who had a debt with Alchemax.[8] Then, when the girl accidentally escaped the Alchemax Building, the Specialist was honor bound to recapture her, ending up in a confrontation with Spider-Man, who accidentally killed him with his talons.[9] In fact, Avatarr hoped that Stark-Fujikawa would waste time and resources avenging the Specialist's death, leaving Alchemax free from its largest opponent and from an inconvenient enemy.[2] However, the plan was not successfully since Spider-Man accidentally fell from a skyscraper and lost himself in Downtown.[10]

When the super-hero phenomena resurfaced in 2099 for the first time since the Heroic Age, Avatarr set up a Board Meeting at Alchemax Headquarters where he proceeded to inform his subordinates about a plan to discredit and replace these heroes.[1][5] Seizing upon the Church of Thor movement, Avatarr selected test subjects to undergo nano-reconstruction into Asgardian archetypes such as Thor Odinson,[4][11] Heimdall,[12] Hela,[13] Baldur[4] and Loki.[14] Those false Gods would use the religion fervor of the Thorites combined with corporate backing to win the people and eliminate the heroes.[4][14][11]

Avatarr's plan failed when a coalition of heroes composed by Doom, Punisher, Ravage and Spider-Man defeated his Aesir, killing several of them and claiming the power of Valhalla, the Aesir's floating city, for themselves.[15][16][14][11][17] Avatarr taunted the heroes ad he departed away, showing the Punisher a vision of his own death in a near future.[17]

After Doom claimed America by right of revolution, he gathered the heads of the MegaCorps together and forced them to submit to his rule. He also demanded they choose one from their number to be killed. Avatarr was chosen as Doom's sacrificial lamb, and was revealed as an alien during the struggle. Doom eventually killed Avatarr, but not before the alien's hallucinogenic enzymes caused Doom to make a politically disastrous live broadcast of the alien's corpse.[18]

Like this? Let us know!
Retrieved from "https://marvel.fandom.com/wiki/Avatarr_(Earth-928)?oldid=6077952"
Community content is available under CC-BY-SA unless otherwise noted.