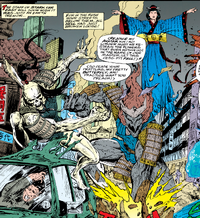 The Avatars were sent by the Mandarin to attack Hong Kong. Lich, Butterfly, Deluge, Foundry and Q'Wake attacked Hong Kong, and were defeated by Force Works, and retreated. Warfist, Ancestor and Old Woman watched while the Mandarin tortured Iron Man and War Machine, and failed to stop Century's attack, forcing the Mandarin to intervene, seemingly killing War Machine and Century.[1]

Warfist and Ancestor thrashed the helpless Iron Man until the Mandarin called them off. Force Works interrogated their captive, Lich.[2]

The Avatars watched as the Mandarin continued to torture Iron Man, and created an enchanted mask to transform a peasant into the newest Avatar, Turmoil. The Mandarin then sent them away, to unmask Iron Man alone.[3]

US Agent and Spider-Woman battled the Mandarin’s armies, defeating Old Woman, Sickle, Warfist and Ancestor, who Agent slammed through a wall, apparently killing him. Scarlet Witch caused the Mandarin's Rings to all misfire at once, with the blast killing Warfist. The Mandarin led the Avatars in his attack on Hong Kong.[4]

After the Avatars conquered Hong Kong, the Mandarin proclaimed himself the last emperor of Cathay.[5]

The Avatars then attacked the Stark Industries Far East Division to bring Iron Man before their leader. Tony infected Mandarin with a Techno-Organic Virus that rapidly aged him, and turned Deluge to dust with a touch. Mandarin and his Avatars then disappeared.[6]

The Avatars returned to fight in the name of the new Mandarin (Temugin; Mandarin's son) and attacked New York City. They fought the Heroes for Hire and were defeated.[7]

Retrieved from "https://marvel.fandom.com/wiki/Avatars_(Earth-616)?oldid=5545054"
Community content is available under CC-BY-SA unless otherwise noted.