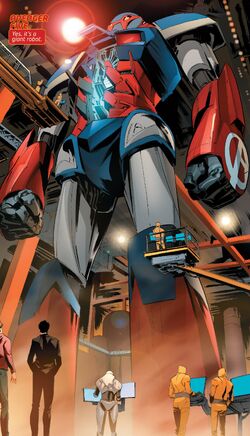 The Avenger Five was a giant mecha developed by A.I.M. (Avenger Idea Mechanics). It was built inside the Engineering Division's Special Section of Avengers Island.

When the US Army attacked Avengers Island with the American Kaiju, Sunspot deployed the Avenger Five to counter the attack.[1]

The Avenger Five is based on A.I.M.'s original Quintronic Man designs. It's a multi-user gestalt exoskeleton powered by Pod, who also serves as the linking system to connect the minds of the pilots.[1]

Like this? Let us know!
Retrieved from "https://marvel.fandom.com/wiki/Avenger_Five?oldid=6433288"
Community content is available under CC-BY-SA unless otherwise noted.