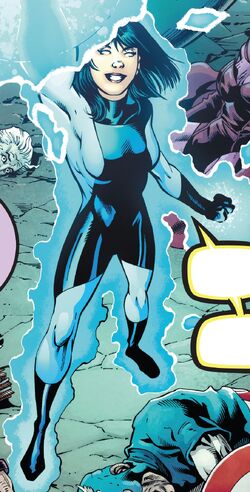 My name is Cressida. Ever since I was a girl, I've had this... ability to make those around me better. Faster. Stronger. I've never understood it, but...

When the Avengers sought the help of the X-Men in tracking down The Stranger, Professor X used Cerebro to direct them to Northern Thailand where they rescued a local woman named Cressida from the Cosmic Being after she mysteriously amplified their powers, as well as temporarily increasing their strength and speed. As Cressida was explaining her capabilities, the Scarlet Witch cut her off and invited her to join them without allowing her to reveal the terrible cost of her ability: that to empower them, she had drained the lives of everyone in the village.[2]

Returning to New York City, Cressida secretly killed the residents of the Sunshine Nursing Home in Queens to use her power to aid the Avengers in defeating a veritable army of miniature replicas of the Awesome Android, much to the amazement of Daredevil and Spider-Man. The Thinker declared Cressida an x-factor he had not accounted for, prompting Hawkeye to dub her Avenger X.

Fearing they would discover her true nature, from within the team Avenger X began to sow seeds of division, warning Captain America that Clint was prone to returning to his thieving past, and attempting to convince Quicksilver that fame was seducing Wanda away from him. Not wanting to hear it, Pietro left Avengers Mansion and wound up encountering the Enforcers. Cressida then siphoned the lives of all the patients at the Healthy Foundation Hospital to boost Ox's abilities, allowing him to catch Quicksilver and subsequently break both his legs.[3]

With Quicksilver momentarily out of the picture as his enhanced metabolism worked to heal the fractures, Avenger X next hired the Acrobat to impersonate Hawkeye and brazenly rob a jewelry store. At first, Steve believed he'd returned to his criminal ways, but when Clint insisted he'd been framed, Rogers instead decided to reunite his team before it completely fell apart. To this end, Captain America asked Reed Richards where they might find the Frightful Four, a group of criminals which had embarrassed the fledgling Avengers prior to Cressida joining the team, though Quicksilver decided he was done with heroics and remained behind.

With their abilities amplified by Avenger X, even shorthanded the Avengers quickly gained the upper hand over the Frightful Four; however, Cressida turned the tables on her allies by dramatically increasing Sandman's powers mid-fight. When all seemed lost, Clint fired an arrow at Wanda's back, which as he expected, drew Pietro out of the shadows and into the fray. Explaining that it was merely a practice arrow, Quicksilver was convinced to help them best Marko together as a unified team once more. Captain America then confronted Avenger X, and with her plot to divide the Avengers foiled, Cressida disclosed the true extent of her abilities by siphoning the Avengers' life force, and utilizing their combined powers to quickly defeat them.[4]

The former Avengers — Wasp, Giant-Man, Iron Man, and Thor — arrived on the scene, prompting Cressida to retreat; however, she was lured back when they pretended to hold a funeral for their fallen teammates she had drained. Revealing that Pym had rejuvenated and immunized them against Avenger X's abilities, they worked together to overcome the might of her capacity to use a combination of their abilities, with Pietro creating a tornado to hurl her through the roof of the Avengers Mansion and into Central Park.

There she encountered three members of the Frightful Four who had been plotting to bury the fourth, Medusa, in a grave they had dug after she expressed reservations about their recent violent activities. Surprising the stunned Cressida, the trio knocked her into the hole, which Trapster filled with quick-drying adhesive from his Paste-Gun. The Wizard then utilized an Anti-Gravity Disc to cover the hollow with a massive boulder, entombing Avenger X therein, and inscribing the stone with an epitaph before fleeing the approaching Avengers.[5]

Many years later, as the M.O.D.O.K. Kang searched time for reinforcements to combat the modern day Avengers, his temporal device revealed that Avenger X would someday escape her tomb[6] which, due to an aberration in the timestream as a result of trapping Kang the Conqueror's future in a Chronal Energy Container, was relocated to the sub basement of Parker Industries,[7] where Cressida did, in fact, escape,[8] defeating Vision, Hercules, Spider-Man, Captain America, and Thor before Iron Man answered Wasp's distress call, and the pair trapped Avenger X in the Microverse.[1]

Life-Force Absorption: Cressida possesses the ability to absorb the life force of other living things in her nearby vicinity to empower herself and others, though it proves ultimately fatal to those being siphoned. She has possessed this ability since childhood, but its origins are unknown.[2]

Like this? Let us know!
Retrieved from "https://marvel.fandom.com/wiki/Avenger_X_(Cressida)_(Earth-616)?oldid=6099521"
Community content is available under CC-BY-SA unless otherwise noted.