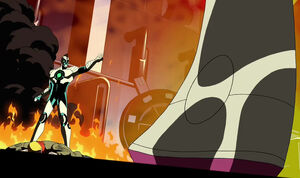 Ant Man and Wasp take a short break from avenging the world to check in on their good friend Major Carol Danvers, currently in charge of a deep space observatory out in the middle of nowhere. This isn't just a social call, however, as Carol needs Hank's help in identifying an object that the telescope picked up a few days ago. Neither Carol nor chief scientist Phillip Lawson believes that it is a natural phenomenon. Meanwhile Jan makes several transparent attempts to make Hank jealous with dead-on results. The object suddenly changes direction and starts heading straight for the telescope, destroying it and coming straight for the observatory. Carol and Wasp drive to the crash site and with Hank hitching an ant ride; they have time for a little girl talk.

Carol warns Jan that continuing to play these jealousy games will ruin their relationship but there is no time for debate as they are set upon by an invisible attacker that shoots green bolts of energy. Wasp fires wildly into the forest while Ant Man calls a large swarm of ants to cover the enemy and make it visible again. As it turns out, the invisible monster is not an alien lifeform it’s an alien robot and it is heading straight for the observatory! Stopping the robot is problematic as its armor seems to be impervious to both Carol's rifle and Wasp's bio-stingers. Carol rushes back to the observatory to evacuate the staff while Ant Man and Wasp hold off the robot and by hold of the robot, we mean Ant Man gets tossed through the observatory's skylight. The robot attempts to destroy the observatory's power core but Ant Man throws off its aim, causing an explosion that hits Carol and Lawson. Lawson is able to protect Carol with a mysterious green energy dome that causes some kind of change in her, but the more immediate concern is that it also disrupts the disguise he was using and reveals his true form. Lawson is, in fact, a member of an alien race known as the Kree, he is a Captain in their Navy's Science division, and his real name is Mar-Vell. Captain Mar-Vell orders the robot to deactivate but it does not comply. It takes out the observatory but everyone escapes the explosion.

After gathering the other Avengers and taking Carol to a hospital, Mar-Vell explains his real identity and purpose. The Kree are at war with another alien race called the Skrulls and both consider Earth to be a strategic location in the larger war. The robot was a Kree Sentry, sent to wipe out any threats on the part of Earth's native population, and if it determines that the threat is too great to wipe out single-handedly, the Sentry is also equipped with a Nega-Bomb that will simply wipe out all life on the planet. Mar-Vell agrees to cooperate with the Avengers in stopping the Sentry since he has taken a personal interest in Earth and believes that humanity should be allowed to survive.

The Avengers intercept the Sentry and Mar-Vell grimly announces that the Nega-Bomb is armed. To deactivate it, they will have to open the robot up and given how impervious to damage it was in their first encounter, this is going to be a problem. While the rest of them struggle with its highly advanced and diverse weapons, Wasp and Ant Man pick a convenient time to have a lovers' quarrel. Just then a whole bunch of projectiles head straight for Wasp and Ant Man takes the blows for her. Seriously injured, he is out of the fight but just barely manages to croak out an "I love you" before losing consciousness. Grief-stricken, Jan flies full speed through the tiniest chink in the Sentry's armor opened up by the combined attacks of every Avenger. She tears the thing apart from the inside and gives Hulk the opening he needs to open the Sentry's chest. The robot's deactivation triggers a transmission from Mar-Vell's commanding officer Yon-Rogg, who declares Mar-Vell a human sympathizer and states that the invasion will continue with or without him. Unfortunately, the bomb is fully charged and Mar-Vell must perform a Heroic Sacrifice to move it away from Earth. Or, he could just leave it to Thor who is actually capable of surviving such things.

Mar-Vell leaves with heartfelt apologies and a promise to lobby as hard as he can for humanity's survival before the Kree government. Hank and Jan realize that they really do care about each other, and Carol regains consciousness to find that she is levitating several feet over her bed.

Retrieved from "https://marvel.fandom.com/wiki/Avengers:_Earth%27s_Mightiest_Heroes_(Animated_Series)_Season_1_10?oldid=5789772"
Community content is available under CC-BY-SA unless otherwise noted.