View source
watch 02:56
Doctor Strange in The Multiverse o Madness - The Loop
Do you like this video?
Play Sound
Part of the Lords of Earthly Vengeance arc

1. "The Lords of Earthly Vengeance - Part One: Where 'Hope' is a Four-Letter Word"

I'm pretty sure what I saw fighting the War Machines... was a Ghost Rider. In the flesh. Or well... bones. But you know what I mean. But what does that mean? For all of us? Suppose it means just one thing as far as I can tell. It means hope. Means a big ol' stinking pile of hope. With my name on it. Me and the rest of Earth's mightest losers.

Appearing in "The Lords of Earthly Vengeance - Part One: Where 'Hope' is a Four-Letter Word"

Synopsis for "The Lords of Earthly Vengeance - Part One: Where 'Hope' is a Four-Letter Word"

AN ALL-NEW SERIES STARRING THE AVENGERS OF THE MULTIVERSE!

On a quest for cosmic vengeance, Ghost Rider finds himself roaring through the wasteland on a ruined Earth, where the great age of heroes never came to be, where hope is a four-letter word and where his only ally in the coming battle against the greatest villains any universe has ever seen is the world's most wanted archaeologist, Tony Stark…the Invincible Ant-Man. Spinning out of the cataclysmic events of AVENGERS #750 and operating in lockstep with the prime AVENGERS series, the next great Avengers saga begins here, as the Mightiest Heroes of every Earth begin to assemble. 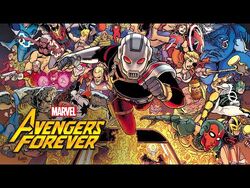