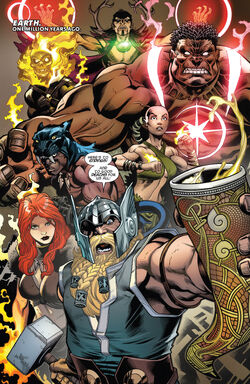 The Avengers of 1,000,000 B.C. during the Stone Age was a group of powerful beings assembled at the dawn of man to slay a deranged Celestial who tried to tear the Earth apart.[4]

Over 1,000,000 years before the present, the early human mutant known as Firehair became the avatar of the Phoenix Force and - overcome by its destructive impulses - nearly razed the planet. Realizing the danger that beings like her posed to the Earth, she began assembling a team of supernatural and mystically-augmented individuals to protect the nascent humanity from both outside threats and itself; recruiting the Asgardian god Odin Borson.[5] Together, Firehair and Odin recruited the demigod sorcerer Agamotto, the Black Panther of the Panther Tribe, the demonically-empowered Ghost Rider, Iron Fist, and Starbrand.[6]

The Fallen and the First Celestial Host

When a deranged Celestial called Zgreb the Sorrower attempted to tear the Earth apart, the Avengers were successfully able to subdue it. While Odin wanted to nail the fallen Celestial to the Moon as warning to the others that would come, the team buried the cosmic giant under the plains of what would become the modern-day country of South Africa instead.[4] Soon afterwards, the First Celestial Host - drawn by the battle against their fallen brethren - arrived on Earth, and the Avengers engaged them in combat but were defeated.[6]

Over the years, the Avengers also fought against numerous time travellers seeking to reshape history to their benefit, initially coming into conflict with a time-displaced Tony Stark. While Mephisto attempted to seduce and torment Tony into selling his soul, the Avengers stood by and watched, obligated not to intervene with their enemy's scheme.[7]

At some point, Mephisto approached a young Thanos and convinced him to travel to Earth to challenge the Avengers in order to prove his might.[8]

Millennia later, Odin's son Thor would follow in his father's footsteps and become the leader of a new team of Avengers.[9] Centuries after that, the fifth iteration of the Avengers was founded to save the world from Loki - the Asgardian god of mischief - and became one of the world's largest superhero teams.[10]