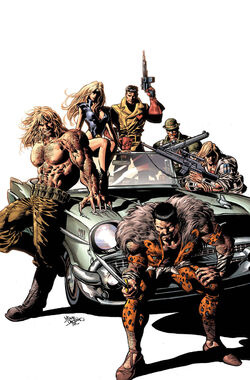 In 1959, Nick Fury was tracked down by a General Hill who had sought Fury out on orders from President Eisenhower to gather operatives for a mission called the Avengers Initiative.[2] Fury and Dugan then went to gather their operatives. Their first stop was the island nation of Madripoor where they recruited the feral mutant known as Sabretooth. In Paris, the soldier of fortune known as Dominic Fortune; the Atlantean princess Namora and her boyfriend master hunter Kraven the Hunter from the Emerald Coast of Florida; and immortal monster hunter Bloodstone and Nazi hunter Silver Sable in Boston, Massachusetts.[3]

With his team of Avengers, Fury took the group to Helsingborg, Sweden, where there were reports of a Red Skull impostor who was gathering former Nazis for a new Reich. The group infiltrated the Nazi's stronghold and set it ablaze after discovering the Nazis had created their own Captain America.[4] Fury and his Avengers slew the faux-Captain America and captured the Red Skull recovering his secret weapon.

However before they could get answers out of him, Sabretooth killed the Red Skull impostor as well.[5] After this, Fury disbanded his group, telling them that he would call for them when he needed them again. He then used his government connections to have some of the international charges against his teammates cleared. Turning over the Red Skull's briefcase over to General Hill, Fury learned that it contained a combination of the Super-Soldier Serum that created Captain America and the Infinity Formula to create a more powerful super-soldier.[6]

In autumn of that year, Fury reformed his Avengers for another mission. However after a brief reunion, Bloodstone and Sable took a leave of absence from the group, the Avengers -- and Fury in particular -- were being targeted by escaped Nazis who were being manipulated by occultist Geoffrey Sydenham who used his influence within the United States government to form an agency known only as ICON.[7] The purpose of ICON was to use the occult to summon the Dark Dimension's ruler Dormammu to protect America from Communist elements.[8] After all the attempts on the lives of the Avengers failed, Fury was approached by the mystic Powell McTeague who offered his assistance to the Avengers in cracking the conspiracy.[9]

With information obtained by McTeague, Fury traveled to the nation of Latveria to rendezvous with his old Howler ally Eric Koenig and the Blonde Phantom to learn what he could about the secret organization recruiting former Nazis. He also learned that T'Chaka, future successor to the title of the Black Panther, was also kidnapped from his home by Sydenham, who claimed to be from the US Defense department. While they found Nazi operative Deiter Skul and the remains of the Lord of Death's Hollow Men zombies.[7]

Fury and the Blonde Phantom next traveled to Wakanda to learn more about T'Chaka's kidnapping. There they learned that Skul had fled to the nation of Madripoor and went there aboard one of Howard Stark's specially built ships. Along the way they were attacked by the Ubermadchen but the battle was ended when the other Avengers arrived on the scene and the Ubermadchen were captured.[10] When they learned from the Ubermadchen that Nazi operatives were being summoned by an known force, Fury had Sabretooth kill the women.

Searching their files, they tracked down Fury's old foe the Planner and attacked his estate as well. From him they learned that Skul was returning to Wakanda to launch an attack along, so Fury and his Avengers followed him there.[8] The Avengers clashed with Skul and his minions, Doctorangutan, Count von Blitzkrieg, Vunderknight, the Leopard Woman and an army of Hollow Men and Kron-bots. Following the defeat of their foes, Fury and the Avengers took their place when Geoffrey Sydenham attempted to teleport the Nazis to Washington D.C. for his spell to contact Dormammu.

There the group stopped more of his Nazi operatives: Baron Blood, Brain Drain, Spider Queen, Geist, and more Hollow Men. The Nazi operatives were either captured and slain along with Sydenham. With the conspiracy taken down, Fury disbanded his Avengers and completed his promise to get them full pardons for their past crimes. Shortly thereafter, Fury learned to his shock and dismay that Sydenham was released even though he committed an act of treason. Fury's friends Dugan and Koenig had managed to rescue T'Chaka, securing peaceful relations between the United States and Wakanda.[11]

Like this? Let us know!
Retrieved from "https://marvel.fandom.com/wiki/Avengers_(1950s)_(Earth-616)?oldid=5544405"
Community content is available under CC-BY-SA unless otherwise noted.