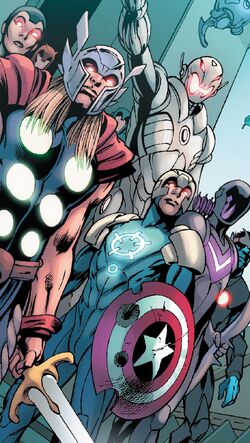 You come to Avengers Tower-- You get the Avengers. Ultron edition.

After having killed all of the Avengers and enslaving humankind as part of an elavorate plan that started in 2420, Ultron created his own version of the Avengers, composed of Vision, the nanite-controlled Thor, and A.I.s modeled after the fallen heroes.[1]

Several years later, the A.I. Avengers calculated the arrival of the time-displaced Avengers from the past, brought to the future by the broken Time Gem, and managed to pin point the space where they would appear, in order to place an indestructible cage around said location.

As soon as the past Avengers arrived and found themselves captured, the A.I. Avengers knocked down Captain America and Black Widow with sleeping gas, and took them out. Captain America captured his past counterpart, and inserted a bomb in his body to be activated after he traveled again into the future due to the Time Gem's time jumps. Meanwhile, Black Widow talked to her past counterpart. After the bomb was implanted in Captain America, the Time Gem appeared again and took the past Avengers further into the future.[2]

Some time later, the A.I. Avengers saw the reign of their master Ultron threatened by the appearance of different Avengers, each from a distinct time period, brought to the present by Doctor Doom. Captain America, Hawkeye, Spider-Woman and Vision confronted the past Vision and Iron Man when they performed a frontal assault at the Avengers Tower to get to the main control unit of Ultron's drone factories. Black Widow came face to face with her past counterpart once again, who was this time accompanied by Hulk and Captain America, when they were trying to destroy the maintenance hub of Ultron's bio-slaves. Thor guarded Ultron's throne in Asgardia from the arrival of other two past Thors.[1]

Spider-Woman was blasted away by the past Vision, who proceeded to later take his future counterpart by surprise and phase his brain out of his body, and subsequently destroy it. Captain America and Hawkeye were blasted by Iron Man after Cap's failed attempt to hack into Rhodes' suit, whose armor didn't have external connections yet. Black Widow's head was cut in half by the Hulk, using Cap's shield. Thor was freed from Ultron's programming when the past Thor expulsed the nanites controlling him, and turned against his master.[3]

The ensuing fate of the remaining Avengers after Ultron's defeat, and Doctor Doom's subsequent world take over and liberation, is unknown.

Retrieved from "https://marvel.fandom.com/wiki/Avengers_(A.I.)_(Earth-14831)?oldid=5610530"
Community content is available under CC-BY-SA unless otherwise noted.