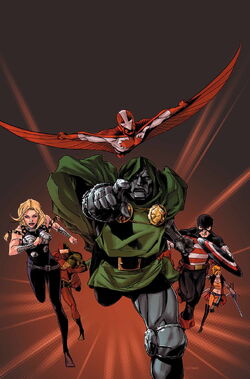 They can do it, Ms. Hill. They can be heroes.

In the wake of the World War Hate, Doctor Doom's personality was inverted, along with that of numerous heroes and villains. After having seen the errors of his ways, Doom planned to redeem himself.

After the Avengers disappeared, having being captured by the inverted and evil Avengers Unity Division, Doom tasked Valeria Richards with the mission to assemble a group of certain available heroes, each having specific skills which could be utilized.

The new Avengers assembled in Doctor Doom's Castle, and jumped into action when the now-evil Scarlet Witch arrived to Latveria to have revenge on Doom.[1]

The Avengers fought the Scarlet Witch and saved villagers trapped in the crossfire. 3D Man managed to get hold of the Witch and take her to a machine Doctor Doom had created to specifically canalize her abilities. Soon after being put into the machine, the Scarlet Witch escaped and set out to find Doom, leaving the Avengers behind. After condensing a portion of Scarlet Witch's powers into the device, Valeria informed the heroes their job was done.

Doom planned to use the Scarlet Witch's powers to right all his wrongs, but with only enough power to correct one sin, he chose to bring back Cassie Lang to life.[2]

Like this? Let us know!
Retrieved from "https://marvel.fandom.com/wiki/Avengers_(Doctor_Doom%27s)_(Earth-616)?oldid=5834774"
Community content is available under CC-BY-SA unless otherwise noted.