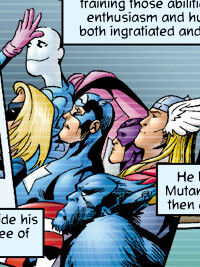 Like many other realities, Earth-1081 has its own version of the Avengers, Earth's mightiest heroes. Not much is known about their history on this world. One roster of the team has been identified as having Captain America, Ms. Marvel, Thor, Beast, Hawkeye and Morph. Morph has since left the Avengers to resume membership with the X-Men before he was pulled from his reality to be a founding member of the reality hopping Exiles.[1] The teams present activities are unknown. One on occasion, Morph mentioned that the Avengers were once trapped in the Negative Zone by Dr. Doom, however the details of this adventure are unknown.[2]

Like this? Let us know!
Retrieved from "https://marvel.fandom.com/wiki/Avengers_(Earth-1081)?oldid=5580795"
Community content is available under CC-BY-SA unless otherwise noted.