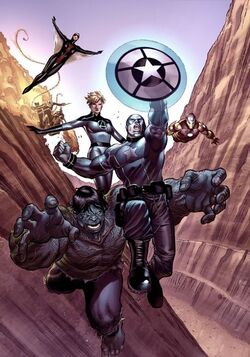 The Avengers were a team of non-mutants superhumans, tasked into hunting mutant threats. Formed by the General Castle, some of them already mutant hunters, such as Redback.[1]

Their first mission, a field test, was to sedate a riot at Camp Gorge, a genetic exclusion zone inside the Grand Canyon. The mission was a failure, as most of the prisoners escaped thanks to the exterior help of Chamber, who killed Ghost Rider and shocked the other Avengers, and a lack of confidence between the members of the team; Invisible Woman trying to protect the rioters from any harm (trying to repair the fact she denounced her family and the mutant they were hiding) while her teammates were intending to kill or hurt any opponents.[1]

The team's second and final mission was to locate and arrest the mutants Magneto saved and gathered after his escape from Manhattan, when he used his powers to stole twenty-two buildings and flee out of town with him, but the true meaning of the mission was to kill all mutants present in the Fortress X, starting with Magneto.

As the position of the buildings fleet was lost, the Avengers were sent on the field to track them, helped with the volunteer Weapon-S, a mutant enslaved and tortured, possessing enhanced smell, and who had been promised freedom once the job done.

As soon as the Fortress was found, the Code Omega was called by Castle, sanctioning the use of lethal force, and Hulk quickly crushed Weapon-S's head.[1]

Using Storm's abilities, the team infiltrated in the Fortress at the dawn of its second day, but the cloak of the Invisible Woman was useless against Callisto heightened senses, and a brawl started. While Captain America had promised to Sue that he intended to save as much lives as possible, he fought using non-lethal weapons, while Steel Corpse and Redback killed or hurt several mutants.

Eventually, Cap was taken over by the violence and shot Mystique with a rifle, killing her and finding out she was only protecting a group of mutant children. Mystique's last words made Steve Rogers abandoning the fight and telling to Castle that the Avengers quited, provoking the Code Omega to take over Steel Corpse's armor to target the children, forcing the Avengers to kill under his own asking.

Castle then launched the plan B: A two megaton chemical bomb to annihilate mutantkind, carried and activated by the Hulk.

Redback, Storm and Cap headed to confront him, using Iron Man's hand-repulsor, and alerting the mutants from the danger incoming. Captain America pledge for the mutant's help, but those were figed by what the former mutant-hunters were asking for.

In the end, Redback used Iron Man's armor to severe Hulk's arm and made the bomb detonate, while the explosion was contained by the newly-formed Force Warriors, powerful telekinetic mutants who banded together to raise a shield by mimicking Storm's power.

Legacy absorbed Captain America's memories, as a tribute for his sacrifice.[1]

Retrieved from "https://marvel.fandom.com/wiki/Avengers_(Earth-11326)?oldid=5634701"
Community content is available under CC-BY-SA unless otherwise noted.