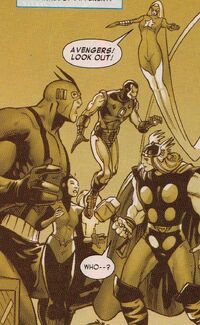 Sharing a very early history with the team's Earth-616 counterpart, the Avengers returned from fighting Namor and Hulk in the arctic to find themselves attacked by the alien Vuk. Saved by the timely arrival of Bright Star and Broad-Stripe, they invited the pair to join. The team later fought Kang before Thor left under mysterious circumstances. Later, when Hawkeye infiltrated Avengers Mansion seeking to join the team, he was defeated by Broad-Stripe and Bright Star and imprisoned. With a lack of new blood, the team eventually drifted apart.

Broad-Stripe and Bright Star formed Americommand, a group of patriotic-themed heroes. Wasp retired from heroics and lived off her trust fund. Giant-Man was committed to a psychiatric facility in Ohio. And Iron Man, seemingly killed, was actually dissected by Broad-Stripe, who put his brain in a jar and kept it to help in her secret mission.[1]

Retrieved from "https://marvel.fandom.com/wiki/Avengers_(Earth-11418)?oldid=5215392"
Community content is available under CC-BY-SA unless otherwise noted.