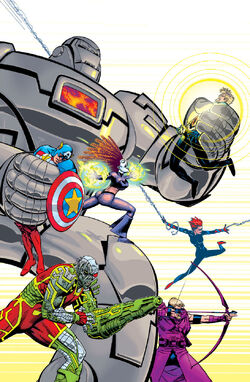 The Avengers, also known as Earth's mightiest heroes, were a superhero team who battled evil forces that threatened the Earth.

When Goblin Queen took over the U.S. Government, she launched a Sentinel attack on Avengers Mansion, wiping out many of the Avengers there. Two surviving Avengers, Yellowjacket and Stingray, later form the Defenders with Doc Samson and Doctor Strange to oppose the Goblin Queen.[1]

The Avengers were later enforced to protect international policies. They met the Six, including Captain America, when they tried to cross the border of Canada to rescue Havok, Wolverine, Wolverine's family, and Jean Grey. After trying to negotiate with the Avengers, the Six attacked them and a battle ensued. Later, when Wolverine and Havok finally made it to the border, they found the Six and the Avengers both defeated by Captain America whose powers were out of control, driving him insane.[2]

Later, after Captain America gained massive energy power, he fired his energies and killed the Avengers, saying that they were traitors, who were only loyal to super-heroics.[3]

Retrieved from "https://marvel.fandom.com/wiki/Avengers_(Earth-1298)?oldid=5580805"
Community content is available under CC-BY-SA unless otherwise noted.