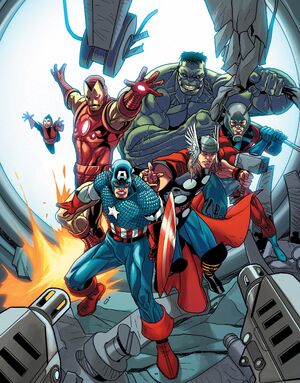 The reality of these Avengers was seemingly destroyed during an Incursion, but they were saved from death by A.I.M. of Earth-616 and brought to their reality.

They escaped from A.I.M. Island and arrived in New York, wondering where they were, and soon realised that they were in an alternate universe. When Thorr noted the humans near him weren't on their knees, he killed them to teach a lesson.[2]

Shortly after, the Avengers were attacked by A.I.M.'s Adaptoids in order to bring them back to A.I.M. Island. However one of the Adaptoids had a rogue behavior which caused the death of Ant-Man, forcing A.I.M. to leave the battle and teleport away. The Avengers also teleported away. Bruce Banner had already left the battle after the Wasp lost control over him and he turned back to his human form.[3]

Four hours later, the body of Ant-Man was found by S.H.I.E.L.D..[2] The Avengers from this universe were called to investigate and found these Avengers in Times Square.[3] Both teams of Avengers engaged in combat, and the tyrant Avengers begun to lose. After Wasp attempted to surrender along with an injured Iron Monger, Hulk arrived and reignited the fight. But A.I.M. stealthily captured both teams in a temporal shielding which made them stand still, and removed the tyrant Avengers in order to bring them back to their reality.[4]

Back at A.I.M. Island, the Scientist Supreme offered the Avengers the opportunity to be taken to a new world, as General America wanted a world with no Avengers, they were taken to Earth-83292.[5]

Retrieved from "https://marvel.fandom.com/wiki/Avengers_(Earth-14325)?oldid=5581245"
Community content is available under CC-BY-SA unless otherwise noted.