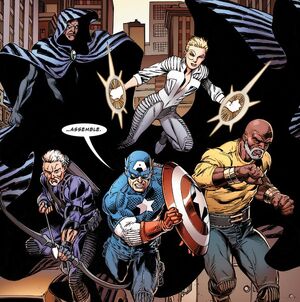 After the Super-Human Registration Act was carried out by Secretary of Defense Tony Stark, a resistance was formed to defy the law, which consisted of the Avengers led by Captain America. The Avengers continually clashed with Stark's U.S.Avengers. During one of the clashes, the Avengers tried to protect Peter Parker from being apprehended by the U.S.Avengers. After Parker disabled the U.S.Avengers' armor and Stark retreated, the Avengers were forced to flee after being warned by Amadeus Cho that enemy support was coming.[1]

What became of the Avengers afterward is unknown. It's likely that its members were among the many superheroes who were left "dead or missing" following Doctor Doom's takeover of the planet.[2]

Retrieved from "https://marvel.fandom.com/wiki/Avengers_(Earth-19529)?oldid=5581380"
Community content is available under CC-BY-SA unless otherwise noted.