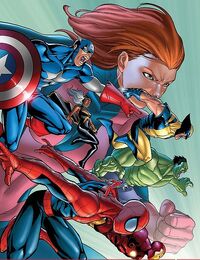 This version of the Avengers are only slightly different, but still somewhat comparable to the Earth-616 version. The most noticeable changes in this incarnation are that the Hulk never disbanded from the team, Storm was a founding member and Janet van Dyne is not Wasp at first, but instead Giant-Girl and much younger; she also barely knew Hank Pym at the beginning of the series. In the team's history, they have battled enemies such as Ultron, Kang, Ego the Living Planet, the Leader, Baron Zemo, the Masters of Evil, the Juggernaut, Dr. Doom and several others, some seemingly new. Although there has never been a true origin for the team, it is implied that they banded together in order to use their abilities more efficiently, to better combat the rise of supervillains and other menaces. These Avengers have also been known to partner up with Earth-20051's Agents of Atlas.

Equipment: Mostly some members individually have their own own equipment. The following equipment is such. Spider-Man's webshooters, Captain America's shield, and Giant-Girl's Pym Particles storage device on her belt.
Transportation: Quinjet
Weapons: Most weapons the team use when all else fails, and are usually assembled when needed, mainly Mjolnir and Wolverine's claws.

Retrieved from "https://marvel.fandom.com/wiki/Avengers_(Earth-20051)?oldid=5215416"
Community content is available under CC-BY-SA unless otherwise noted.