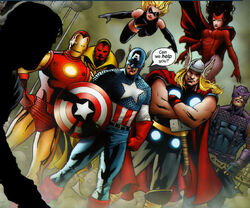 Little is detailed about the Avengers’ before the zombie plague arrived on Earth-2149, however it can be presumed that it followed much the same path as the Avengers of Earth-616. However, they are the first on the scene when a zombified Sentry bursts onto Earth-2149, and therefore the first heroes of this reality to be infected.

The Avengers are at Avengers Mansion when a man tries to blast his way into the mansion. They greet the intruder aggressively and demand he explain himself. The man begins ranting about an Army of the Dead, and begins to get a little hot under the collar until Scarlet Witch gets tired of him and “Bamfs” the madman into a park duck-pond to cool off.

When they get reports of purple lightning, and the Sentry attacking people downtown, the Colonel America, Black Widow, Ms. Marvel, Luke Cage, and Hawkeye set off there in the Quinjet, and en route they see the madman once more panicking people. They land and speak to him, and when Spider-Man offers to help, Colonel America asks him to wrap up to man and take him away. When they arrive to tackle Sentry, they are quickly overpowered, bitten and infected with the zombie contagion. They then turn their attention on the general populace.

When an infected Colonel America launches himself into the air, and bites Spider-Man on the shoulder, Spidey drops Ash Williams, the madman, right at the feet of the newly zombified Avengers.[1]

The team rather quickly fell apart, as most of it's members were killed as time passed, and what remained became a part of the Zombies.

Retrieved from "https://marvel.fandom.com/wiki/Avengers_(Earth-2149)?oldid=5580823"
Community content is available under CC-BY-SA unless otherwise noted.