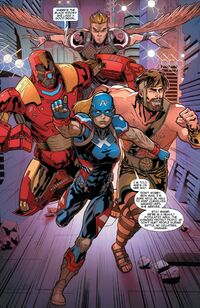 Origin
After working together to defeat Loki, a group of five founding heroes (Giant-Man, Hulk, Iron Man, Thor, Wasp) banded together to battle evil no one hero could defeat.

The Avengers were recreated by Alchemax CEO Tyler Stone. After becoming handicapped, Stone passed on control of both Alchemax and the Avengers to his son Miguel.[3]

After an attempt on Roberta Mendez's life, Stone send the team to investigate Martin Hargood, who he believed to have hired the assassin. Locating him at a restaurant called Latverian Cuisine, they found him arguing with John Eisenhart. When they ignored Eisenhart's orders to leave, he revealed that he was the vigilante known as The Hulk and attacked the Avengers. After taking the fight outside, the team was confronted by Hulk's teammates, the Defenders.[2]

Captain America claimed that treating heroes like villains this way was unfair and rebelled against Miguel's orders. With the help of Hercules, she managed to rescue the Defenders who had been kept prisoners while fighting against her fellow teammates. After the Defenders had escaped, Strange used a portal to rescue Captain America[3]

During the incident, Martin Hargood's holding device broke down, allowing him to escape and use Alchemax's virtual unreality laboratory to summon the Dweller-in-Darkness. Meanwhile, Miguel called in the Avengers to defend the city from the Dweller, allowing the Defenders to intervene without being arrested. While Iron Man, Silver Surfer, Sub-Mariner and Hulk confronted the Dweller, the rest of both teams confronted Hargood. After Hargood was knocked out, Strange was able to reverse the effects of the portal that brought the Dweller, and brought it back to where it came from.

When the dust settled, Miguel allowed the Defenders to continue operating as an act of gratitude.[5]

Retrieved from "https://marvel.fandom.com/wiki/Avengers_(Earth-23291)?oldid=5178672"
Community content is available under CC-BY-SA unless otherwise noted.