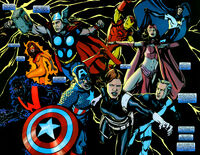 The Avengers were attacked by Jessica Jones when she was under the Purple Man's control; after the vicious counterstrike by the Avengers, Jessica was hospitalized and comatose. Jean Grey helped her regain her mind, and when she awoke, she was surrounded by the Avengers, Nick Fury and Jean. Nick Fury offered her a job with S.H.I.E.L.D. as their liaison to the Avengers. Slightly dazed, Jessica accepted Fury's offer and soon joined the Avengers as a member.

The Avengers were aided by Jessica in numerous missions after she joined, including one against the Squadron Supreme. Not long after the Squadron Supreme mission, Jessica informed Captain America of her suspicions about the Scarlet Witch. The team soon confronted the Scarlet Witch, who admitted that she felt her sanity slipping. Captain America then explained to Jessica what was happening and the two shared a kiss and were soon wed.[citation needed]

Retrieved from "https://marvel.fandom.com/wiki/Avengers_(Earth-523002)?oldid=5215435"
Community content is available under CC-BY-SA unless otherwise noted.