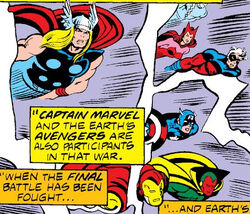 The formation of the Avengers on Earth-7812 would begin slightly differently than their Earth-616 counterparts. In this reality, Rick Jones would become the Hulk instead of Bruce Banner. When Loki would seek out a pawn to get revenge against his brother Thor, he would manipulate Rick into transforming into the Hulk, and then he would trick the Hulk into smashing a train bridge to get his brother's attention.

While accounts are vague, Loki's manipulations would lead to the teaming of Thor, Hulk, Iron Man, Ant-Man, and the Wasp. Following Loki's defeat the assemblage of heroes would agree to form a team of heroes, dubbing themselves the Avengers. Much like on Earth-616 the alien Space Phantom would use the group's mistrust of the Hulk to divide the Hulk from the Avengers. However, in this reality, Bruce Banner would temporarily cure Rick Jones of being the Hulk, and he would leave the group.

Presumably, the Avengers would go onto have similar adventures as their Earth-616 counterparts. Confirmed new recruits would include Captain America, Scarlet Witch, Quicksilver and the Vision.

Some months later, after Rick would be bonded to Captain Marvel, the Avengers would be involved in the Kree/Skrull War. While their involvement is not fully recorded, active Avengers during this mission would at least include Thor, Iron Man, Quicksilver, Scarlet Witch, Captain America, and Vision. Presumably, events would unfold much like they did on Earth-616. The Avenger's activities following Rick Jones using the Destiny Force to immobilize the Kree and Skrulls remains unrevealed.

On Earth-616, it would be Rick Jones who gathers together Thor, Ant-Man, Iron Man and Wasp to handle the Hulk when Loki would manipulate his Ham radio transmission. How these heroes would come to join forces since on Earth-7812 Rick was the Hulk remains unexplained.

Retrieved from "https://marvel.fandom.com/wiki/Avengers_(Earth-7812)?oldid=5580870"
Community content is available under CC-BY-SA unless otherwise noted.