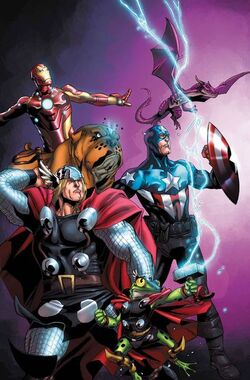 Protecting life in all of its forms is an Avenger's task... something we forget at times.

The Avengers seemingly had the same history as its Earth-616 counterpart.

After discovering that Fin Fang Foom had been digging into Earth's core, Captain America, Iron Man, and Thor went to confront him. After Iron Man prompted a fight, Foom turned the three into frogs. While unable to call the rest of the team, Thor was able to contact the Pet Avengers.[1] However, the Pet Avengers were unable to help against Foom's legion of dragons who then proceed to swallow whole everyone but Lockheed.[2] The teams were able to escape the dragons only to find all the dragons gone. Suddenly, they gone an emergency message from Commander Steve Rogers about the dragons attacking Xi'an.[3] The teams arrived in China to find that Lockheed had allied with Foom. He revealed Foom's motives to his fellow Pet Avengers, but not to the other three Avengers teams. They fought until the dragons escaped, with Throg explaining that they were simply searching for their eggs. Proud of their animal counterparts, the Avengers created Pet Avengers Mansion as their new base.[4]

Like this? Let us know!
Retrieved from "https://marvel.fandom.com/wiki/Avengers_(Earth-97161)?oldid=6254001"
Community content is available under CC-BY-SA unless otherwise noted.