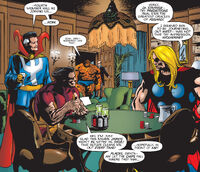 Unlike Earth-616, Earth-98 does not operate on a Sliding Timescale and as such the passage of time and the details of events have progressed much slower. In this reality the Modern Age of Heroes (which is identified as the birth of the Fantastic Four occurred in the year 1961. Whereas the Earth-616 universe currently[note 1] measures the Modern Age as being in existence for about fourteen years. When this reality was visited by the Thing of Earth-616, the modern age of his reality had existed for ten years, while the modern age of Earth-98 had existed for 37 years at that time. It should also be noted that while "year ten" on of the modern age of Earth-616 will always be moving forward in time, the year that Ben Grimm-616 visited this reality will always be the calendar year 1998. Events on this world appear to be more or less analogous to Earth-616, despite the differences, but the timeframe moves much slower.

The Avengers of Earth-98 were formed in 1963, presumably their history mirrors that of their Earth-616 counterparts. In 1964 they revived Captain America from suspended animation. Over the years the Avengers held a weekly poker game with the Thing. In the early 1990s Captain America died defending the people of Oklahoma from a terrorist attack.

By 1998 the Avengers line-up included Thor, Doctor Strange, and Wolverine. When Ben Grimm of Earth-616 was accidently launched into this dimension by Reed Richards particle alternator he was bewildered by how different this world was to his own. Learning of the floating poker game at Avengers Mansion the Thing decided to attend to learn more about this reality. Discovering that this was not the Ben Grimm of their reality, Doctor Strange and the others provided more answers to the Thing's questions about how events transpired on this reality. Soon after the Thing returned to his own reality.[1]


Cite error: <ref> tags exist for a group named "note", but no corresponding <references group="note"/> tag was found.
Retrieved from "https://marvel.fandom.com/wiki/Avengers_(Earth-98)?oldid=5215473"
Community content is available under CC-BY-SA unless otherwise noted.