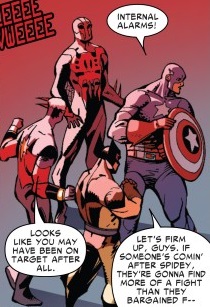 In the near-future reality of Earth-98120, the Avengers have reportedly battled such threats as Oort the Living Comet and the Solar Squadron, but otherwise the history of this team is unknown.

The Avengers were returning from space after their encounter with the Solar Squadron when Songbird was kidnapped through time to take part in the Destiny War.[1] She was returned to her reality at Avengers Mansion, where she was greeted by her teammates, the Wasp and Jack of Hearts.[2]

Retrieved from "https://marvel.fandom.com/wiki/Avengers_(Earth-98120)?oldid=5582819"
Community content is available under CC-BY-SA unless otherwise noted.