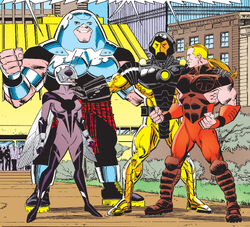 The history of the Avengers from Earth-982 parallels their Earth-616 counterparts up until roughly the birth of Spider-Man's first child.

At one point, the Avengers detected the existence of a fascist parallel universe that threatened the safety of their own. The team traveled to that universe in order to battle their own evil counterparts. Their victory was costly, with members such as Justice, Firestar, Tigra and Giant-Man killed, Hawkeye blinded, Hercules near-insane, and Captain America left behind to gather a resistance. Iron Man and Scarlet Witch established a permanent barrier, powered by Wanda's gifts, to prevent any further incursions from that universe.[1]

The Avengers officially disbanded shortly after this great crisis. Avengers Mansion was overseen by the Maria Stark Foundation, and tours were given daily.[2] A brief attempt to revive the Avengers came with heroes such as Nova, Jubilee, Speedball, Steel Spider, and Jolt, but they disbanded as well.[3]

Kevin Masterson, son of Eric Masterson, was called to the Avengers Mansion to receive the weapon Thunderstrike upon his return to New York City from California. Thor wished Kevin to have it as a memento from Eric, now dead, and at first Kevin was saddened to find the weapon no longer wielded any power. Upon leaving the compound, a contingent of troll-men from Asgard accosted Kevin for the mace, and Edwin Jarvis, chief of staff at the Avengers Mansion, initiated the long dormant Avengers signal to assemble. Only Jubilation Lee, now leader of the X-People, and Helen Takahama (Jolt) received the summons. Cassandra Lang, while out testing modified Ant-Man/Wasp designs through communication with her father Scott Lang, picked up the distress call in her antenna and responded, to her father's dismay. Robbie Baldwin (Speedball) and Zane Yama (J2) saw the commotion on the street and also responded. The enigmatic Mainframe also showed up. After a battle that sent them to Asgard and lead to Kevin "fusing" with the mace Thunderstrike, Mainframe proposed that the group continue as the Avengers. Jolt, Speedball, and Jubilee declined for personal reasons but commented that they were always willing to help. A-Next was created then with Mainframe, the Stinger, J2, and Thunderstrike.[2]

Like this? Let us know!
Retrieved from "https://marvel.fandom.com/wiki/Avengers_(Earth-982)?oldid=6759635"
Community content is available under CC-BY-SA unless otherwise noted.