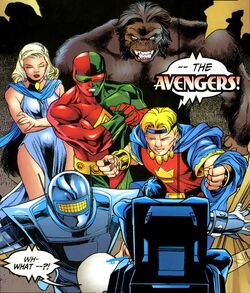 On Earth-9904, Jimmy Woo sought super-powered champions to help him defeat the menace of Yellow Claw. He gathered 3-D Man, Marvel Boy, Gorilla-Man, the Human Robot, and Venus into a group that was dubbed the Avengers.

The Avengers either would stay together or be reunited, the circumstances behind this remain unrevealed. Whatever the case may be, the Avengers were stationed to defend Richard Nixon during a Fourth of July appearance in California. Unknown to the Avengers, Nixon had been replaced by a Skrull seeking to sabotage America's space program. When the Wasp and Captain Marvel (two time-displaced Avengers from Earth-616) arrived on Earth-9904 to prevent a chronal anomaly from occurring, they were mistaken as Communists seeking to kidnap Nixon, leading to a clash with the Avengers of Earth-9904. The battle was cut short when Immortus revealed Nixon as a Skrull. Seeking to prevent the human race in this universe from developing space travel, Immortus then used the Forever Crystal to destroy this reality, and the Avengers of this world perished as a result.[2]

Retrieved from "https://marvel.fandom.com/wiki/Avengers_(Earth-9904)?oldid=5581087"
Community content is available under CC-BY-SA unless otherwise noted.