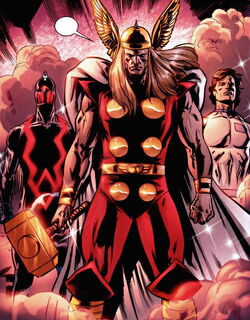 Much of the Avengers history on Earth-9997 matches that of their Earth-616 counterpart; at the time of humanity's mass mutation on Earth-9997, the Avengers consisted of Captain America, Hawkeye, the Wasp, Giant-Man, Iron Man, Quicksilver, and Scarlet Witch.

During this point, some of the Avengers continued to mutate due to exposure to the Terrigen Mists, most notably Hawkeye who grew two extra arms. Iron Man, fearing what he may become if mutated, sealed himself in one of his factories and eventually began providing technological support for the United States President Norman Osborn (while secretly building an army of Iron Men robots in a plan to police the world.)

Captain America left the team and began working for S.H.I.E.L.D. after he was forced to kill his long time foe, the Red Skull. He left the group feeling that he was not worthy of their ranks, in spite of their objections.

The final roster of the original Avengers group (consisting of Vision, Scarlet Witch, Quicksilver, Hawkeye, Giant Man, and the Wasp) were soon defending Washington, D.C. from an attack by "Crusher" Creel, aka the Absorbing Man. Creel had absorbed the intellect of the robot known as Ultron. This gave Creel greater, more unlimited abilities. He then used these powers to slay the Avengers and destroy Washington D.C., but was eventually stopped when the Vision infected him with a computer virus and was smashed to pieces when he tried to stall its effect by shrinking down and turning into stone. Vision then distributed the parts of Creel to various members of the super-human community for safekeeping.

The Avengers were then disbanded; however, Tony Stark later built the Iron Avengers, a group of robots that were fashioned after each member of the deceased team. These Iron Avengers were joined by Vision, Captain America and Redwing (Wyatt Wingfoot) and worked for President Osborn (much to Cap's chagrin.) They were primarily used to keep back the ever growing legion of Hydra beings that were gaining foothold in New York City. They later aided Thor in battling Loki and an army of Frost Giants that attacked New York City.

Eventually, with the Skull's invasion of New York City, the Iron Avengers were destroyed by his army. During the battle, New York was visited by the Celestials, who were attacked by Tony Stark and his factory, converted into a giant robot to do battle. He proved to be no match for the powerful beings and was quickly defeated, and died as a result.

The Iron Avengers were later rebuilt and mass produced by King Britain, and put under the charge of Black Knight (Black Bolt's son) to act as defenders of Buckingham Palace and defenders of the Human Torches that burned the Terrigen Mists from the air.

Captain America was eventually slain during Mar-Vell's quest to collect items of power. He and many other dead Avengers eventually aided Mar-Vell in his battle against Death in the Realm of the Dead.

The Iron Avengers (unofficially referred to as the Iron Men) were sent on a mission to check on the Human Torch in the Savage Land and ended up in a conflict with the Toad who ruled there. Toad was eventually defeated, and the Iron Avengers were repaired by Magneto. They were also used in their battle against the newly resurrected Absorbing Man, who had literally absorbed New York City. His defeat (and Earth's survival) was almost lost when the Vision, selfishly wanting revenge, forced Creel to become intangible, but he was soon talked into turning Creel back by Loki and Iron Maiden.

After the battle, the Iron Avengers returned to their posts at Buckingham Palace.

Many of the deceased Avengers were granted entry into Mar-Vell's Paradise, and three of their members -- Captain America, Iron Man and Giant Man -- became members of Mar-Vell's Avenging Host, and acted as angels to bring the deceased to Mar-Vell's realm from the Realm of the Dead.

These deceased members eventually confronted Mar-Vell over the effect Paradise was having on the Negative Zone, and battled during the Kree invasion of Paradise. After the battle, Captain America returned to the Realm of the Dead to live with his family, and Hawkeye was made a member of the Avenging Host.

On Earth, after finally standing up to his father Odin, Loki wished to become a hero and soon took on the guise of Thor and joined with Ransak the Reject and Black Bolt (formrly the Black Knight) as a new team of Avengers. Their fate is unknown.

Here is a list other previous members of the Avengers who have been seen active on Earth-9997.

Black Widow: Is deceased through unknown circumstances, was a member of Mar-Vell's army of the dead, and also went to Paradise. She has a successor on Earth who's identity is unknown.

Wonder Man: Is deceased through unknown circumstances, was a member of Mar-Vell's army of the dead, and also went to Paradise.

Spider-Man: Retired from being a hero, but following the battle with the Skull joined up with the NYPD.

Ant-Man: Sought refuge within Tony Stark's factory when his daughter began to mutate, and became trapped within. He later apparently survived and took in the child of John Jameson, whose wife abandoned their child when she began to mutate.

Beast: Was living in Wakanda as an adviser to Black Panther and Storm. Eventually relocated to the Savage Land when the Wakandans were forced to leave their land due to constant attacks made by an army of Wendigo.

Black Knight (Dane Whitman): Joined up with Earth-9997's Excalibur and was turned to stone by Grey Gargoyle. He was later eventually freed by Mephisto who was posing as Captain U.K. and Grey Gargoyle in an attempt to cause disunity against the royal family of Britain.

Black Panther: Mutated further gaining a panther like appearance, married Storm of the X-Men and returned to rule Wakanda. He was given the Cosmic Cube for sake keeping by Captain America and swore to never use it. He eventually inadvertently did so, causing Wakandan animals to mutate. He later relocated his kingdom to the Savage Land following constant attacks by an army of Wendigos.

Crystal: Her status is unknown, although Death used her image to trick Quicksilver into beleving he was still alive when he was aiding Mar-Vell in his attack on Death.

Falcon: Joined the Hydra, who uses his body. He is technically deceased, was a member of Mar-Vell's army of the dead, and also went to Paradise.,

Hulk: Mutated further to the point where he was two separate entities, a young Bruce Banner, and a beast known as the Hulk which was under Banner's control. Aided the heroes against the Skull, aided in relocating Wakanda, and was on Reed Richards scientific council to find a new Death.

Human Torch (Jim Hammond): Incidentally deactivated himself, apparently because he had no more will to live.

Invisible Woman: Was killed in an explosion by Dr. Doom meant for Reed Richards. Resided in the Realm of the Dead until she was resurrected by Mar-Vell and Adam Warlock using one of Reed Richards own arms.

Jack of Hearts: Is a member of King Britian's army in England.

Justice: Was killed when the Skull's powers manifested and killed all the worlds telepaths.

Machine Man: Was recruited by Uatu to replace him as the Watcher, learned of the Celestial plot and aided Earth during it's numerous crisis. Now is the Watchman of Earth.

Mr. Fantastic: After the mutation of humankind and the disassembling of the Fantastic Four, Reed took up Doom's identity and worked on a way to try and cure humanity. Aided the worlds heroes on innumerable instances. Was soon given the Cosmic Conciousness by Mar-Vell and became ruler of Paradise.

Moon Knight: Protected the tomb of Konshu from the Sons of Set until Mar-Vel claimed the Re-Animator stone at which point Moon Knight died. He later aided Mar-Vell in the realm of the dead.

Namor: Was cursed by Franklin Richards to forever burn after killing the Human Torch (Johnny Storm), became a slave to the Skull. Later aided in the raising of Mar-Vell and was cured of his constant burning by Dr. Strange.

Sandman: Was a slave to the Skull. The Skull's mind control apparently began to slowly kill the Sandman because he couldn't keep himself together. His current ware abouts are unknown.

She-Hulk: Became the leader of the Hydra, technically deceased through unknown, was a member of Mar-Vell's army of the dead, and also went to Paradise.,

Thor: Was turned into a woman by Odin. Learned the treachery made by Clea. Was convinced by Loki that they were aliens and not gods. Aided Loki in creating "Ragnarök" and defeating Odin. Returned to Earth and reassumed his guise as Donald Blake.

Retrieved from "https://marvel.fandom.com/wiki/Avengers_(Earth-9997)?oldid=5581118"
Community content is available under CC-BY-SA unless otherwise noted.