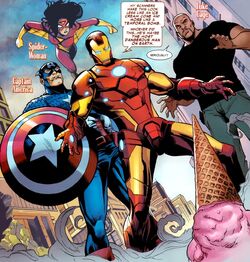 Saving the world, sir. It's what we do.

A failed experiment in the Horizon Labs of another universe transported their Peter Parker to a universe where he never existed, the home reality of this Avengers.

Some time after he arrived, Iron Man noted a chrono disturbance in the area, during which only Peter Parker was transported to different moments of his time.

Fearing it would represent a big threat, he assembled the Avengers in order to investigate what caused the disturbance, and detected an abnormality in Parker and headed to capture him, who was visiting the Ben Parker of this universe.

As soon as another disturbance appeared, which was revealed to be Horizon Labs, Peter asked the team to take him there, and maybe the time continuum would be fixed. As soon as Peter Parker entered the epicentrum of the disturbance, he returned to his universe.[1]

Retrieved from "https://marvel.fandom.com/wiki/Avengers_(Earth-TRN207)?oldid=5582897"
Community content is available under CC-BY-SA unless otherwise noted.