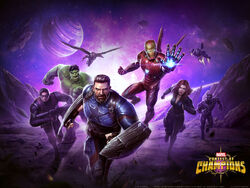 The Avengers is one of the several existing teams from throughout the Multiverse whose members were taken to Battlerealm to be put at the disposal of the participants of the Contest of Champions.

When Ultron took control of a valuable section of Battlerealm and started to take over the Contest of Champions, the Collector assembled a team of Avengers out of the Champions of Battlerealm to assist the Summoner in his quest to defeat Ultron. After Ultron was defeated, the team was seemingly disbanded.

Retrieved from "https://marvel.fandom.com/wiki/Avengers_(Earth-TRN517)?oldid=5688359"
Community content is available under CC-BY-SA unless otherwise noted.