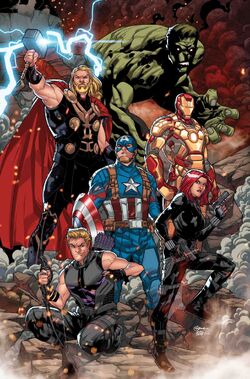 The Avengers shared a similar history with their Earth-199999 counterparts until after the Chitauri invasion of New York City. During Tony Stark's birthday party a Zombie attacked but was taken out by Black Widow. However, it was discovered that the infection is spread by touch and both Thor and Black Widow have become infected. The Avengers attempted to contain Thor and Black Widow whilst Bruce Banner and Tony looked for a cure. Thor escaped and went after the other Avengers.[1]

Like this? Let us know!
Retrieved from "https://marvel.fandom.com/wiki/Avengers_(Earth-TRN808)?oldid=7107407"
Community content is available under CC-BY-SA unless otherwise noted.