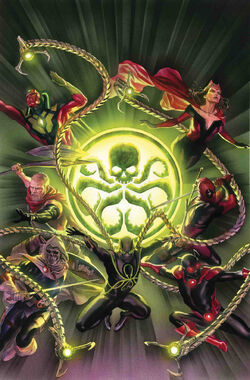 After neutralizing many superheroes deemed as threats and driving the remainder underground, Hydra assembled a new team of Avengers to defend the United States from severe threats. The team consisted of Taskmaster, Black Ant, Deadpool, the Superior Octopus, the Scarlet Witch (who had been possessed by Chthon), the Vision (who was being controlled by an A.I. virus created by Arnim Zola), and Odinson (who had been promised the chance to save Jane Foster from the alternate dimension she was banished to and help in the restoration of Midgard's connection to Asgard in exchange for his aid). One of their first known tasks was slaying the monster Krigorrath in Denver, Colorado.[1][2][3]

The Avengers aided Hydra in recovering the remnants of the sentient Cosmic Cube Kobik. They took part in an attack on a temple in Atlantis (the remnant there turned out to be a fake)[2] and were led by Hydra Supreme Steve Rogers on a mission to recover a fragment in the Ultronic Territories that they eventually lost to the Underground.[4]

The Avengers were also tasked with preventing the mutant Sunfire from being broken out of jail by his fellow mutants of New Tian[5] and apprehending a team of Inhumans led by ex-S.H.I.E.L.D. agent Quake.[6] Scarlet Witch, Vision, and Odinson were later ordered to attack the Underground's hideout, The Mount, though they were unable to break through its defenses, and Odinson chose to let the Underground escape.[7]

As well as defending the United States, the Avengers were tasked with defending Hydra assets in foreign territories including a worldwide network of automated signal-boost outposts that maintained the Planetary Defense Shield.[8]

The Avengers started to fall apart when the Underground and its allies mobilized to overthrow Hydra's control of the country. Odinson, Superior Octopus, Scarlet Witch, and Vision were sent to stop the heroes, but Odinson decided to switch sides after growing tired of Hydra's atrocities, Scarlet Witch was freed from Chthon's possession by Doctor Strange, and Vision freed himself of Zola's A.I. virus with help from his daughter Viv. Taskmaster and Black Ant chose to quit working for Hydra after the pair realized that Hydra was going to lose and even freed young heroes being held in Hydra's custody.[9] Deadpool chose to quit Hydra after realizing Hydra was evil.[10]

Retrieved from "https://marvel.fandom.com/wiki/Avengers_(Hydra)_(Earth-616)?oldid=5604468"
Community content is available under CC-BY-SA unless otherwise noted.