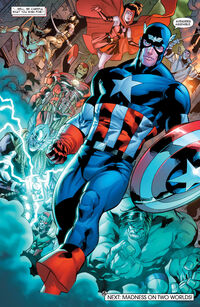 Some time ago, the heroes of Earth-616 clashed with the psionic entity known as Onslaught a being spawned from the dark sides of Charles Xavier and Magneto. In the final battle the Avengers and Fantastic Four and many of their allies seemingly sacrificed their lives to destroy Onslaught.[1] In reality they were transported to a pocket dimension with a reproduction of Earth (later dubbed Counter-Earth by Franklin Richards where they were reborn into new lives that were similar to those of their lives on Earth-616.[2][3][4][5] After living in this pocket dimension the heroes were eventually returned to their native Earth.[6]

Following the events of M-Day,[7] Onslaught was resurrected and he immediately sought to get revenge against Franklin Richards attacking him at the Baxter Building home of his family the Fantastic Four. When Onslaught kept on possessing the various members of the Fantastic Four, Franklin sought to escape by creating a new pocket dimension based on the original Counter-Earth to escape in.[8]

This pocket dimension had it's own version of the Avengers and Fantastic Four based on the lives the heroes lived when they were reborn on Counter-Earth, however there were many distinct differences. Unlike Counter-Earth, the heroes of this world were not transported from Earth-616 to live out new lives, they were all creations of Franklin Richard's mind. For example, unlike his Counter-Earth counterpart the Thor in this dimension reverts into Donald Blake after being separated from his hammer Mjolnir for sixty seconds.[9] Also unlike Counter-Earth or Earth-616, Hawkeye is not Clint Barton on this world, but the mutant Logan, known in many realities as Wolverine.[10]

The End of the Fantastic Four

The Quiet Man and the Psycho Man opened a portal to the Onslaught Reborn's Counter-Earth. From there came out the Onslaught Reborn Avengers that battled against the Prime Marvel Universe's heroes; that Avengers team was more similar to Heroes Reborn Avengers than the Onslaught version: Clint Barton was Hawkeye, wearing the same suit the 616 Clint wore during Heroes Reborn, Captain America had on his uniform the S.H.I.E.L.D.'s eagle, rather than the classic "A", like in Heroes Reborn Captain America's Series; also, Wonder Man and Scarlet Witch, who were members of the Masters of Evil, were present as Avengers. These evil Avengers were killed in battle, except for Hawkeye (Barton), Hulk, and the two Avengers who were not present in that battle: Hawkeye (Logan) and Ant-Man.[11]

In the Fantastic Four story arc, in the team of Avengers there are new characters that weren't present during the Onslaught Reborn Vol 1 series: Wonder Man and Scarlet Witch who were in the Masters of Evil team of supervillains and the Hulk who was an enemy in the original miniseries.

Retrieved from "https://marvel.fandom.com/wiki/Avengers_(Onslaught_Reborn)_(Earth-616)?oldid=5544730"
Community content is available under CC-BY-SA unless otherwise noted.