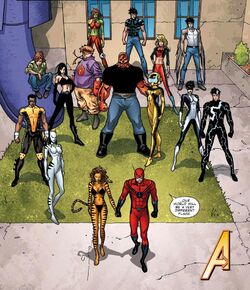 As the head of H.A.M.M.E.R., Norman Osborn recruited young people with superpowers in order to make them the next generation of superheroes under his control. So, he pushed and tortured them in order to develop their powers. Once Osborn was out of power, the Avengers went through his files and found the most dangerous students, those students who have failed their psych profiles, and those who had the power to destroy city blocks. The Avengers wanted to train these kids to prevent them from becoming dangerous supervillains.[3]

The Avengers formed the Avengers Academy, similar to the Initiative program, where veterans taught youngsters to become heroes. They tried to conceal the fact that they are trying to prevent the students from going rogue, fearing that the students might have internalized it if they found out.[3]

Months later the team went out in public as their normal selves (except for Hazmat and Mettle, who were shrunk down in Dr. Pym's pocket). Whirlwind then showed up and attacked a bystander which made Dr. Pym attack and attempt to avenge Wasp. Whirlwind was then soon put down and the identities of the Avengers Academy students became public.[4]

When the Serpent invaded Midgard, the students of Avengers Academy were deployed to the front lines in Washington, D.C. Later, they found themselves under attack by two of the Worthy. The Infinite Mansion became their battleground and was destroyed. [5]

In the aftermath, Veil left the student body while Justice and Speedball resigned their positions as teachers.[2]

The Academy opened up the student body to a wider crowd.[2] The Academy reopened its doors at the Avengers West Coast former base Avengers Compound. When the school reopened, most of the original students felt they were going to be kicked out, which caused a fight to between the original class and Luke Cage, Captain America, and Hawkeye. The fight ended after Jocasta temporarily stunned everyone and explained what was really going on. The students took a break calm down. Meanwhile, Hawkeye decided to ask Dr. Pym if he could join as a staff member. The original students then met the two new regular students White Tiger and Lightspeed. The meeting was cut short after Quicksilver showed up and told everyone that someone has "murdered" Jocasta. Upon hearing everyone gathered around her destroyed body in shock. While everyone gathered Reptil sent a message to an alternate future where the future versions of the original Avengers Academy class resided. At this point it was revealed that Reptil's body was being possessed by his future self. After Giant Man called the X-Men in hopes of finding out who attacked Jocasta the future Reptil helped Hybrid infiltrate the student body, posing as a mutant boy.[6]

He helped him to make sure the events that creates his future happened. Hybrid fed on the Academy's superhuman minds, but the future Reptil had a change of heart and activated the alarm. Together students and faculty managed to banish Hybrid to another dimension. Jocasta was revealed to be alive. She appeared with Veil to shut down the Academy.[7]

Jocasta began removing her technology from the complex when Quicksilver attacked her. After a brief battle Briggs Chemicals LLC arrived. Giant Man told Jocasta that if she let Juston's Sentinel analyze her, he would let her retire her technology. While Pym searched for the Sentinel's head, Briggs offered the students a place in his company. While many rejected it, Machine Teen and Rocket Racer agreed.[8]

After the Avengers invaded Utopia and the X-Men escape, they left behind their students. Hercules tried to organize little Olympic games to calm down things between the kids, but it ultimately failed. Then, Sebastian Shaw, former X-Men villain whose memories had been erased, apparently regained his memories and escaped his cell to kill the X-Men's kids. While the faculty battled Shaw, a battle erupted between the numerous students. Shaw made his way to the students and revealed that he came to free them. The faculty let the X-Men go fight in a fake battle except for Loa, who decided to stay.[9]

Five Phoenix empowered X-Men began using their powers for good but slowly became corrupted. Emma Frost started destroying Sentinels and eventually she went to the Academy to destroy Juston's. She offered to spare it if he erased its programming, a request which he refused. After a short battle, Frost destroyed the Sentinel and seemingly obliterated its CPU too before leaving. However, Quicksilver swapped out the Sentinel's real CPU with a duplicate before Frost destroyed it, allowing Juston's Sentinel to be repaired.[10]

The next day Pym and Tigra told the students the school would be temporary closed until the war with the X-Men ended. After a conflict with the members and Briggs' organization, both Jocasta and Veil rejoined the academy. Briggs was killed by Finesse with unconscious X-23's claws. When the school reopened, many of the students graduated and Veil again left the school to return to her normal school.[11]

The Avengers Academy was one of the many hubs for Arcade's abduction of heroes to fight in his "games." He kidnapped X-23, Hazmat, Reptil, Juston and his Sentinel, and Mettle. The casualties from the school were Mettle, Juston, and Reptil.[12][13][14] Following their liberation, Hazmat left and joined with other survivors[15] and X-23 left and joined the Past X-Men.[16]

The other students participated in a contest of champions with other super powered schools. It was interrupted by Thanos' invasion.

After the liberation of Terrigen Mists to the atmosphere by Black Bolt, Avengers Academy students were seen along Xavier's School for Gifted Youngsters students cleaning debris. After Pixie heard about a newly manifested Inhuman, Fiona, who was going to commit suicide, she stopped her. Eventually, Fiona joined the Academy.[17]

Retrieved from "https://marvel.fandom.com/wiki/Avengers_Academy_(Earth-616)?oldid=6108664"
Community content is available under CC-BY-SA unless otherwise noted.